Haaland scores in his last game for Dortmund 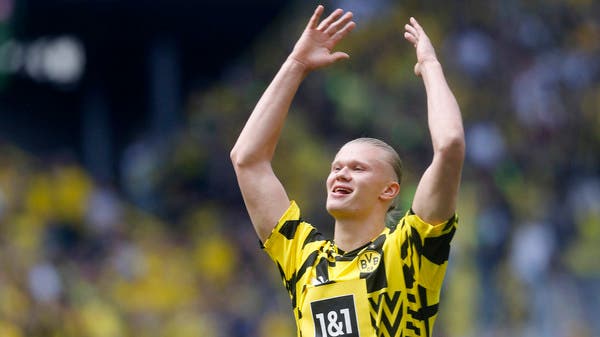 Erling Haaland scored a goal in his last match with Borussia Dortmund to lead him to a 2-1 victory over Hertha Berlin at the end of the German Football League (DFL) on Saturday, to enter its guest in the play-off.

Haaland scored from a penalty kick to equalize, scoring his 86th goal in 89 matches with Dortmund in all competitions since 2020. Dortmund finished the season in second place behind title-caught Bayern Munich.

The Norwegian striker will join Manchester City next season, with media outlets indicating that the total amount paid will reach 300 million euros. Herta took the lead in the 18th minute through a penalty kick by Algerian Isaac Belfodil.

But Dortmund, who said goodbye to several players in addition to sporting director Michael Zorc, needed a long time to equalise.

Dortmund got a penalty after a handball on Marvin Platnhardt, and Haaland, who had scored in his first ever league match, hit the net in the 68th minute.

Youssoufa Mukoko decided Dortmund’s victory with a low shot that bounced off the post and into the goal in the 84th minute, to end the season in 16th place by Hertha, after Stuttgart grabbed the victory in stoppage time over Cologne to advance to 15th place.

Felix Magath, who took over in mid-March when Hertha was 17th, had hoped to lead the team to survival but now will have to face third-placed second-placed in the play-offs.