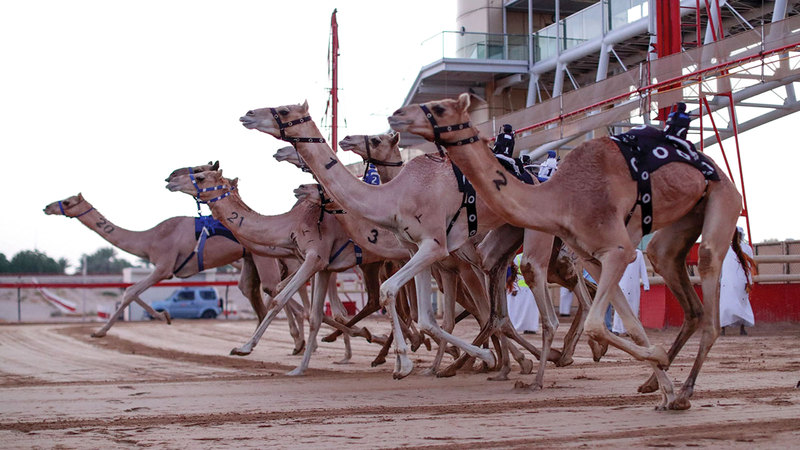 And led the implied Obaid Muhammad in Al-Dabaa’a “Nujoud” owned by the camel of His Highness Sheikh Hamdan bin Mohammed bin Rashid Al Maktoum, to the lead in the first half with a time of 6:13:4 minutes, while the pronoun Mukhtar Ahmed Abdul Malik continued his brilliance with the slogan of the hybrid of Sheikh Mohammed bin Butti Al Hamed, as he led “what is afraid” to the forefront of Al-Laqaya Al-Jadan locality, in a time of 6:12:0 minutes.

“Afrah” shone with the slogan of His Highness Sheikh Maktoum bin Mohammed bin Rashid Al Maktoum, in the third half of the first round, and won the first place led by the implied Tarish Mubarak in Al Quba’a, recording a time of 6:21:5 minutes, and “Mayas” created a hybrid of Seih Al Salam in the half. The fourth for Al-Qaya Al-Jaadan Al-Mahjanat, under the leadership of Al-Mudmar Saeed Salem Al-Junaibi, who achieved the best time in all runs by reaching the finish line with a time of 6:10:3 minutes.

On the other hand, the storm camels excelled in the radio age competitions for the five-kilometre camel of His Highnesses, at the end of the third round of the Marmoom Preliminary.

The slogan of Sheikh Mohammed bin Butti Al Hamed shined through the first challenges of the local broadcaster, Al-Bakkar, where the implied Mukhtar Ahmed Abdul-Malik presented “Teams” with a time of 7:47:8 minutes, and the same logo renewed its brilliance through the second game, as “Adham” finished the king The hybrid of Sheikh Mohammed bin Butti Al Hamed, the local radio Al Jadan challenge journey led by Mukhtar Ahmed Abdul Malik, at a time of 7:55:0 minutes. v The brilliance belonged to the “Shaheeniya” for the storm hybrid, which was led by Ghayath Al-Hilali to the top of the radio, Al-Bakkar Al-Mahjanet, in the third round, with a time of 8:00:3 minutes, while “Majd” gave the first place to the slogan of His Highness Sheikh Hamdan bin Mohammed bin Rashid Al Maktoum, in the fourth round. Al-Jadaan broadcasted the hybrids, as he was able to resolve the battle under the leadership of Al-Mudhamar Obaid Muhammad in Al-Dabaiah in a time of 8:01:0 minutes.