Halland celebrates the “hat-trick” 14. Arsenal are in the lead and Liverpool survives in the 98th minute (video) 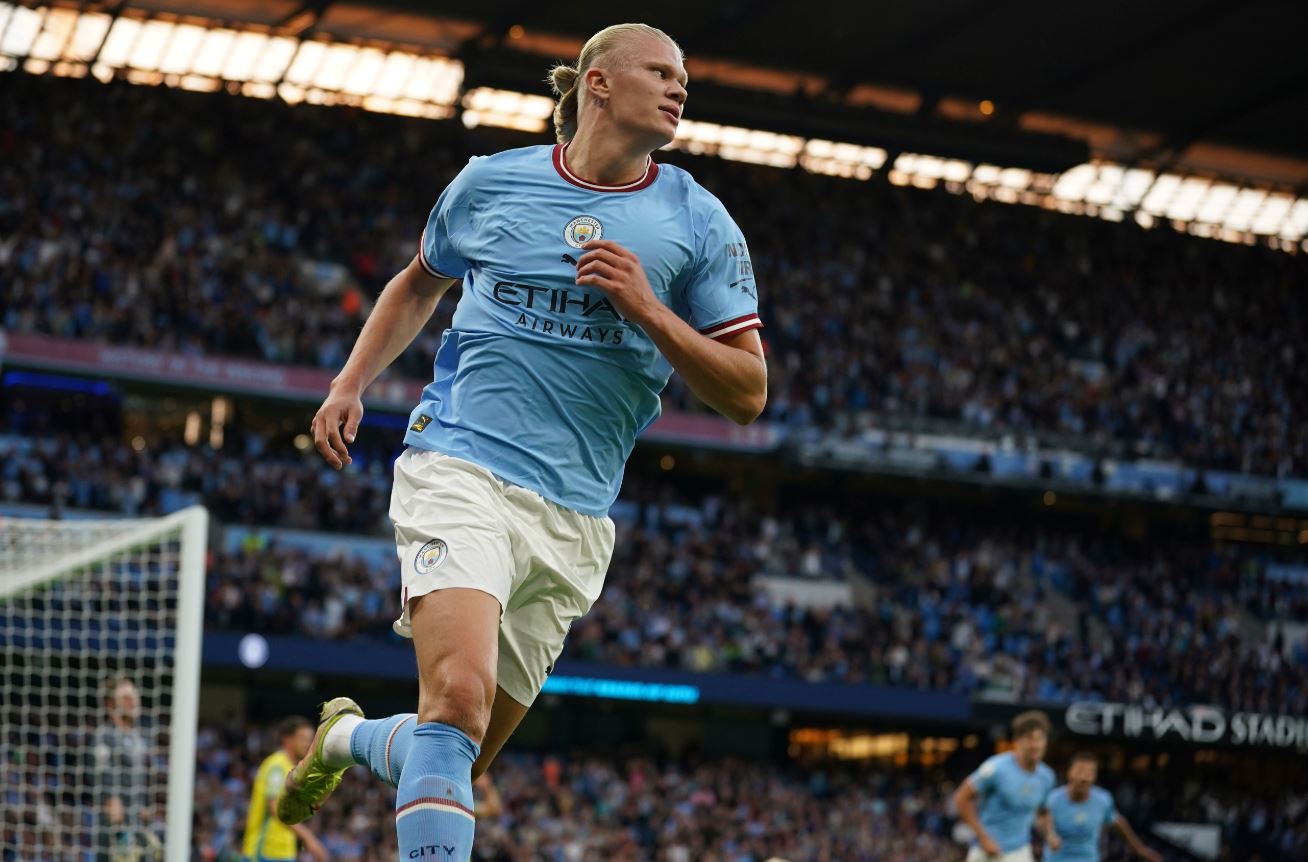 Arsenal continued its path at a steady pace in the English Premier League, achieving its fifth victory in a row against its host Aston Villa 2-1 in the fifth stage of Wednesday’s competitions, which witnessed a second consecutive hat-trick and a record for Norwegian Erling Haaland during Manchester City’s 6-0 victory over Nottingham Forest. This is the 14th hat-trick in the history of the Norwegian star, who has so far scored nine goals with City in five matches.

Arsenal escaped the trap of Aston Villa and coach Steven Gerrard, achieving the full mark with two goals scored by Brazilian Gabriel Jesus (30) and Gabriel Martinelli (77), while their compatriot Douglas Lewis scored Aston Villa’s only goal (74). With this victory, the men of Spanish coach Mikel Arteta maintained the top of the Premier League table with 15 points from five games, while Aston Villa remained in the nineteenth place with three points.
In another match, Halland led Manchester City to a wide victory over its newly promoted guest, Nottingham Forest, with a clean six, scoring three goals (12, 24, 38), while Portuguese Joao Cancelo (50) and Argentine Julian Alvares (65) scored. and 87) the other three objectives.

Highlights from a sensational night at the Etihad! 💥#ManCity pic.twitter.com/VffZXNwqaT

With this victory, City remained in second place with 13 points, two points behind Arsenal, while Nottingham Forest, with 4 points, remained in the fourteenth place.
With this second hat-trick in a row, Haaland became the first player in the history of the English Premier League to score 9 goals in his first five matches in the Premier League, overtaking former City player Sergio Aguero and Mick Quinn from Newcastle. The Norwegian needed five matches to score two hat-tricks in the Premier League, while the previous record was held by Senegalese Demba Ba in 21 matches.
City continued to celebrate its goals and scored the fourth goal when Cancelo reached a pass from Portuguese Bruno Silva on the outskirts of the penalty area, and he hit a missile ball in the upper right corner of the goal (50). Alvares scored the last two goals for City, the first in the 65th minute when he received a pass from the Algerian Riyad Mahrez and hit it powerfully into the net, and the second in the 87th minute, when he got a rebound from the defense, to hit the top corner of the goal.

Hollywood win for Liverpool
Shortly after that, Liverpool won a fatal victory against its guest Newcastle 2-1. At Anfield, Newcastle opened the scoring through Swedish newcomer Alexander Isaac (38), after receiving an elaborate interface inside the region, to be unique to Brazilian goalkeeper Alison and score easily. Liverpool waited until the second half to equalize, specifically in the 61st minute, after the Egyptian Mohamed Salah passed a ball to Brazilian Roberto Firmino inside the area, to hit the latter in the net.

While the match was breathing its last, the Reds’ killer goal came in the eighth minute of stoppage time, when Portuguese Fabio Carvalho followed a ball away from the Newcastle defense inside the penalty area, and hit a powerful ball that shook the net. With this victory, Liverpool raised its score to 8 points in fifth place, while Newcastle, with 6 points, remained in eleventh place. On the other hand, Tottenham missed a valuable victory by drawing 1-1 with West Ham at the latter’s home.

Tottenham advanced with a goal through friendly fire from West Ham defender Tilo Kehrer by an own goal (34), before Czech Tomas Socic equalized for Tottenham (55). Tottenham raised its score to 11 points in third place, while West Ham’s tally rose to 4 points in 14th place. Bournemouth also drew with Wolverhampton in a negative way.