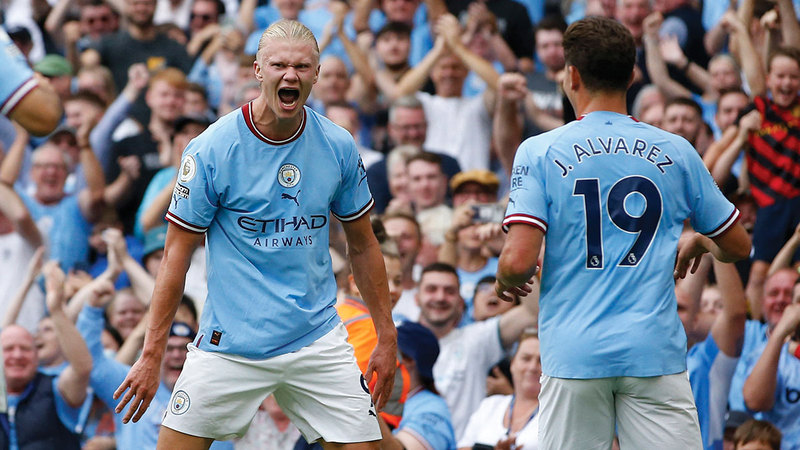 The Norwegian giant, Erling Haaland, presented himself strongly in the match of the fourth stage of the English Premier League, the day before yesterday, when he led Man City to “Remontada”, and overturned the 2-0 defeat to a 4-2 victory, after he scored a hat-trick, his first in the competition, And another goal, signed by Portuguese Bernardo Silva, to give his team three valuable points in a difficult match.

Halland translated the description he calls as a “goal machine”, which he has proven so far, after raising his league goals to six in just four matches, and continuing what he was accustomed to before, when he played for Dortmund and with the Norway national team.

What increases his high ability to score is his flexibility and speed, despite his impressive height of 1.94 meters, and his young age (22 years).

With the strength and abundance of stars owned by Man City, led by a distinguished coach, the Spaniard Guardiola, Haaland may be the piece that City was missing to achieve the dream of winning the Champions League this season, and to celebrate a historic season, after controlling for years the Premier League title.

At this rate, Haaland may hit all the records for scorers this season, as he has so far an average of 1.5 goals in the league, and he was famous previously with his country, and with all the clubs he played for, that he did not drop an average of at least a goal in every game.

And a report by the “BBC” about the player expected to easily exceed 40 goals or more in the competition this season, as in the history of the English Premier League only 10 players scored 30 or more when they won the top scorer title.

Haaland has a wonderful and unprecedented goal rate for a player of his age, as with Norway he scored 20 goals in 21 games, including a hat-trick twice, and with the Austrian Red Bull Salzburg he scored 29 goals in 27 games, and with Borussia Dortmund he scored 86 goals in 89 A match, knowing that he was absent for periods due to injury, and he signed a hat-trick on four occasions.

As for his career as a whole, since he started playing with the juniors in his Norwegian birth team, Haaland scored 161 goals in 191 matches, and has 13 “hat-tricks”.

Ironically, his father, who previously played in the English Premier League, Alf Inge has 18 goals in his career as a whole, which Haaland can reach at the current rate in October.

What raises the level of expectations for Haaland with City is that he is a first-class scorer, and he will benefit from the presence of two of the most prominent players in the world in the play industry and creating scoring opportunities, the Belgian De Bruyne and the Portuguese Bernardo Silva, along with other stars in Man City who are very interested in The current season in maintaining its title in the English Premier League, and competing strongly for the title of Champions League.

In a press statement, after the exciting victory over Crystal Palace, Haaland said, “For those matches, I am in this team, to change things and turn things around when we are going through difficult times.”

“Of course what I saw on the pitch made me happy, and I felt connected with my team-mates, of course it will take more time, but I know it will happen, things will get better, and it feels good.”

• Halland, despite his young age, has scored 13 “hat-tricks” in his football career so far.