Halland is pleased with “City” with a great victory.. Arsenal strengthens the lead and Liverpool returns with strength 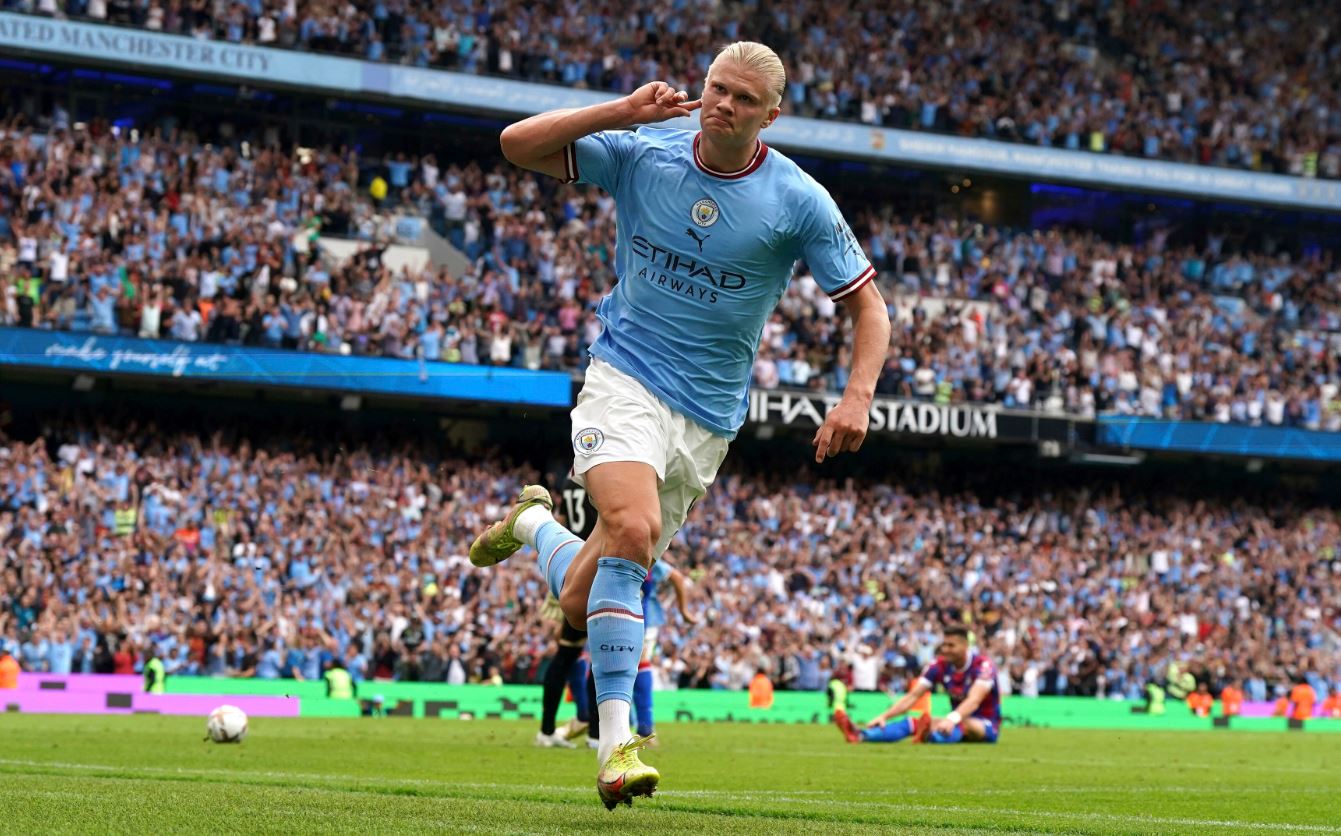 The Norwegian top scorer, Erling Haaland, returned the defending champion Manchester City from afar and gave him a triple victory over his guest Crystal Palace 4-2 after he was behind 0-2, while Liverpool bared his teeth after his worst start in a decade by sweeping Bournemouth 9-0 yesterday in stage 4 From the English Premier League, equaling the largest victory in the history of “Premier League” since its launch in 1992, while Arsenal continued its perfect start with a fourth successive victory and capture the lead.
In the absence of Ivory Coast star Wilfried Zaha, who had a leg injury, Palace seemed to be on course to beat City in its stronghold, as it did last season 2-0 during the tenth stage, after it advanced with two goals. City showed that what they experienced in the last stage, when they were behind against Newcastle 1-3 before saving the 3-3 draw point, was not a coincidence, but that the Spanish coach Pep Guardiola’s team was slow to enter the atmosphere, as he returned from afar and avoided defeat for the fourth time in the last Six league games, an extension of last season.
The start of the match was disastrous for City, as he found himself behind with two clean goals after 21 minutes, the first in the fourth minute with a gift from John Stones, who turned the ball into his net by mistake after a free kick by Iberici Eze, and the second header by Danish Joachim Andersen after a corner kick (21) . Portuguese Bernardo Silva City returned to the atmosphere at the beginning of the second half after a great individual effort (53).
Halland then took the initiative with a tie header (62), before scoring the goal of progress after a series of passes inside the area, which John Stones ended by preparing the ball for the Norwegian (70), who completed his triple and scored his sixth goal in his new team shirt after a counterattack and a perfect through pass from German substitute Ilkay Gundogan. (81).

Liverpool record
Liverpool equaled the record for the Premier League, which began in 1992, recorded in the name of rival Manchester United, who beat Ipswich 9-0 in 1995 and then Southampton with the same result last year, and Leicester City, who beat Southampton 9-0 also in 2019.
The Brazilian Roberto Firmino was the hero of the match by passing the first three goals balls scored by Colombian Luis Dias with a header (3), Harvey Elliott (6) and Trent Alexander-Arnold from outside the area (28), before he was rewarded for his efforts by scoring the fourth goals (31) and then the seventh. (62).
Liverpool ended the first half with five thanks to a goal by Dutch defender Virgil van Dijk with a header after he received the ball from Scottish Andrew Robertson after a corner kick (45), to end the “red” first half with five goals for the first time in the history of his participation in the Premier League. But he did not stop there, but added a sixth at the beginning of the second with a gift from Welsh defender Christopher Mepham, who turned the ball into his net after a cross from Alexander-Arnold (46), before Firmino added his second personal goal (62) and then substitute Fabio Carvalho, the eighth ( 80) And Luis Dias ninth for his team and the second for him with a header (85).

Gabriel the hero
At the Emirates Stadium, Brazilian defender Gabriel turned from evil to hero, after he caused the goal to advance to guest neighbor Fulham through Serbian Aleksandar Mitrovic (56), before returning and giving his team his fourth win in a row, 2-1, in his best start since 2004 ( He scored five consecutive wins.
Gabriel scored the goal that kept the home team the only winning team in all matches this season, in the 85th minute after a corner kick, after the Danish Martin Odegaard preceded him to equalize after a pass from Bukayo Saka and a shot that shifted from the defense and deceived the former goalkeeper of the German defender Bernd Leno (64). He scored his third goal of the season.
Manchester United continued his awakening and returned with a second successive victory from Southampton 1-0, in the first participation of his new Brazilian midfielder Casemiro, who entered at the end of the meeting, while Portuguese star Cristiano Ronaldo waited until the last third of an hour to participate after he started as a substitute again.