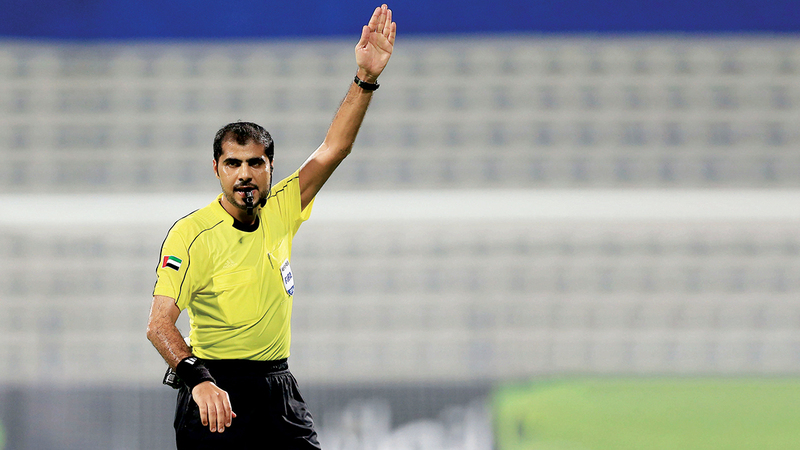 The “Dorina” wheel will return to rotation today, after the last stop, to make way for the first national football team to participate in the “Gulf 25”, which was held in Iraq and concluded last Thursday. The ADNOC Professional League will resume its matches through the 13th round, after 12 past rounds that witnessed a lot of excitement, and part of it was related to one of the most important pillars of the game, namely the match referees, as a statistic monitored by «Emirates Today» revealed that 21 referees managed until the end of the last 12th round. 84 matches, including three foreign referees, while referees Hamad Ali Youssef and Adel Al-Naqbi topped the list of most managing matches, as each of them led eight matches.

It is noteworthy that the referee, Hamad Ali Youssef, who is considered one of the best referees in the UAE league, had retired in September 2019 from international arbitration, and gave up the international badge, while continuing to manage matches in local competitions, and attributed his decision at that time to what he described as special circumstances. While Adel Al-Naqbi is considered one of the most prominent international referees in the UAE League competition, he also recently starred in leading matches in the “Gulf 25” championship.

The former international football referee, Muhammad Al-Junaibi, stressed the importance of stadium judges having a distinguished management of the various matches that they run, as this will reduce errors in the match, and also reduce pressure on the referee and the players, when the referee is focused, and manages the match in an acceptable manner. , so that it removes tension and nervousness from the players.

Al-Junaibi told Emirates Al-Youm: The video referee (mouse) in the ADNOC Professional League is less accurate in calculating offsides, compared to his counterpart during the 2022 World Cup.

In response to a question about the most lesson that the judges of the UAE league stadiums learned from the referees who participated in managing the Qatar World Cup matches, he explained: “There is no specific lesson in this regard, but how to manage the match by arbitration is the most lesson that the judges of the league stadiums must learn from the referees who They led the World Cup matches, and I believe that the stadium judges in the local league followed how the confrontations were managed by the World Cup referees, and there is no doubt that they benefited from the expertise that characterizes the World Cup referees.

And he continued, “In my estimation, the referees of the local league must have a distinguished management of the match, as it reduces mistakes and relieves pressure on the referee and players.”

Al-Junaibi continued, “The last World Cup participated in managing its matches with the best referees in the world, and it was an opportunity for the referees of the local league to follow up and benefit from every referee who participated in managing the World Cup matches, through his personality, and by reducing arbitration errors, and I see that the league referees focused on such these things.”