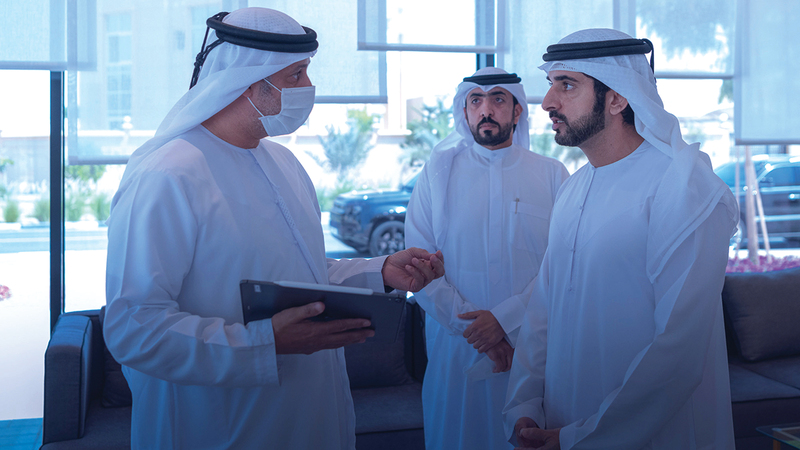 His Highness Sheikh Hamdan bin Mohammed bin Rashid Al Maktoum, Crown Prince of Dubai and Chairman of the Executive Council, has approved the date of the 31st edition of the Al Gaffal Long Distance Race, which is dedicated to local 60-foot sailing ships, organized under the patronage of His Highness the Dubai International Marine Club from Sir Bu Nair Island to The beaches of Dubai, where the race will be held from 27-29 March.

This came when His Highness, the Crown Prince of Dubai, received the delegation of the Dubai International Marine Club, the organizer of the event, in the presence of: Chairman of the Board of Directors of the club Ahmed bin Meshar, his deputy, Saif Al-Suwaidi, and the Executive Director of the club, Mohammed Hareb.

The generous sponsorship of the race by His Highness, the Crown Prince of Dubai, for the second year in a row, comes from his belief in the importance of preserving the past of fathers and grandfathers, and as an incentive for generations from different segments of society to participate and adhere to the popular heritage and restore images of historical epics from the past in the bright present, and to complement the message that he established. The late, God willing, Sheikh Hamdan bin Rashid Al Maktoum, may God rest his soul, who established this event in 1991, to continue annually within the activities organized by the Dubai International Marine Club, and comes at the conclusion of the marine sports season 2021-2022.

His Highness, the event sponsor, was briefed on the club’s plans to organize and make the current edition of the race a success, and the joint efforts between the club’s organizing committees and partners from government departments and national institutions; To ensure the safety of the participants, and the arrival of their ships to the place of the start of the race on Sir Bu Nair Island in the depths of the waters of the Arabian Gulf, and then choose the appropriate time for the start and start of the race in conditions that guarantee the safety and security of the participants, and pave the way for the return of the ships to the shores of Dubai in safety on the day of the race.

His Highness Sheikh Hamdan bin Mohammed bin Rashid Al Maktoum directed the club’s board of directors to facilitate the task of the participants in the event, and to complete all technical preparations in order to complete the upcoming race and provide all the ingredients for its success, in continuation of the efforts made since the establishment of the race in 1991, so that it remains the most expensive and most prestigious marine sports event. And the annual carnival, which garners widespread attention and follow-up.

Al Qaffal is considered the oldest and largest heritage race in the Gulf region and the Arab world for three decades and since its launch in 1991 as a great message from the wise leadership to successive generations in order to revive the past of parents and grandparents whose lives were linked to the sea as a source of livelihood and abundant good. Since that date, Al Qaffal has become a heritage carnival and maritime festival that everyone awaits as an annual date that is renewed every year, and brings together more than 3,000 people in the waters of the Arabian Gulf in a sports epic starting from Sir Bu Nair Island, passing through Comoros Island, for ships to travel more than 50 nautical miles to the shores of Dubai.

The last edition of the event achieved remarkable success, represented by the participation of more than 100 ships that painted a bright heritage painting in the waters of the Arabian Gulf, where the crew of the “Nimran 211” ship first managed to reach the finish line off the island of “Blue Waters” to win the title for the first time.

• His Highness directed to facilitate the task of the participants in the oldest race of its kind in the Arab world.