Hamdok Al-Burhan agreement in front of the “biggest test” .. Demonstrations in Khartoum 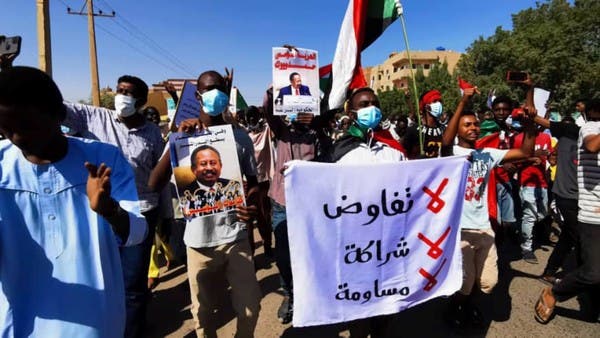 Today, Thursday, a number of civil groups are preparing to demonstrate in the streets of Khartoum and other cities, calling for the restoration of complete civil rule in the country, and renewing their rejection of the agreement signed on the 21st of this month (November 2021) between Prime Minister Abdullah Hamdok and army commander Abdel Fattah al-Burhan.

The movement also calls for continuing pressure on the new military-civilian authorities, whose composition was modified a few days ago, after the armed forces dissolved the former Sovereign Council and the government.

Today’s demonstrations come after several calls made on social media over the past days, to organize a “Martyrs’ Day” in honor of the victims who have fallen since October 25, the day the army imposed exceptional measures in the country, following a campaign of arrests that included politicians and activists, besides Hamdok himself, before To be released the next day, and placed under house arrest for weeks.

A test of the Hamdok Al-Burhan agreement

In this regard, the United Nations Special Representative to Sudan, Volker Perthes, wrote on his official account on Twitter in Arabic, yesterday, Wednesday, “Thursday’s rallies in Sudan represent another test of the credibility of the November 21 agreement.”

He added, “The right to peaceful assembly and freedom of expression must be protected. The voices of resistance committees, youth, women and political forces must be heard without bloodshed or arbitrary arrests.”

Tomorrow’s rallies in Sudan represent another test of the credibility of the November 21 agreement. The rights to peaceful assembly and freedom of expression must be protected. The voices of the resistance committees, youth, women and political forces must be heard without bloodshed or arbitrary arrests.

In turn, Hamdok considered in a press interview yesterday the processions that will start today, the “biggest test” in front of the framework political agreement, which he signed with the army chief last Sunday.

Killing protesters will not pass

In addition, he stressed that the right to demonstrate is guaranteed to the Sudanese people. He said, “We spoke strictly with the security services not to interfere with the peaceful demonstrations” that will take place in Khartoum and other cities of the country today, and I consider this a real test and challenge that may break the agreement if there is an attack on the demonstrators.

He also stressed that the killing of demonstrators during the last period cannot pass without accountability.

Meanwhile, his office announced in a statement yesterday that the Prime Minister had ordered the scheduled demonstrations to be secured.

It is noteworthy that the agreement signed last Sunday stipulated the release of all political detainees, the start of a dialogue between all political forces to establish the constitutional conference, as well as the cancellation of the army commander’s decision to relieve the prime minister. It also stipulated the speedy completion of all institutions of transitional governance.

Its provisions also included working to build a unified national army, as well as restructuring the committee to dismantle the Bashir regime and reviewing its performance.

However, the signing of this agreement sparked several criticisms from Hamdok’s political incubator, which are several groups affiliated with the forces of freedom and change, noting that the divisions of the latter seemed clear during the last period.