Hamdok’s first appearance.. Scenes that bring him together with Al-Burhan and Hemedti 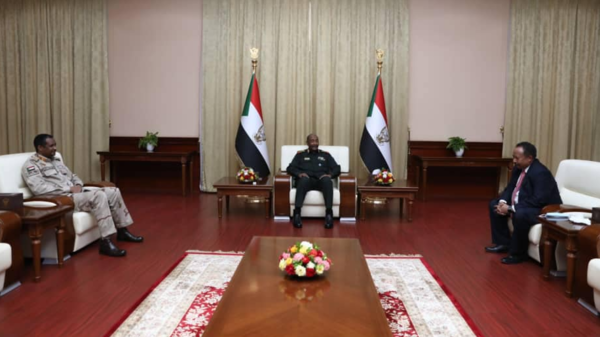 The signing ceremony of the political agreement began in Khartoum today, Sunday, when the Sudanese Transitional Sovereignty Council published the first photo of the President of the Sovereign Council, Abdel-Fattah Al-Burhan, the dismissed Prime Minister Abdullah Hamdok, and the Vice-President of the Council, Mohamed Hamdan Dagalo (Hemedti), at the Republic Palace.

In parallel, Sudan TV broadcast live clips a while ago that showed the three gathered in the hall where the agreement was announced, in the presence of various media outlets and a number of politicians and personalities.

This came, after rapid developments that occurred in the Sudanese corset during the past hours, as the Sudanese are awaiting, today, the announcement of the political agreement, which was reached between the civil and military components.

Informed sources revealed that the agreement reached yesterday evening between the two sides (Al-Burhan and Hamdok) stipulated several provisions, foremost of which is the release of all political detainees since last October 25, when the army imposed exceptional measures and dissolved the government.

It also included preparing a charter to manage the next phase, and to ensure the continuation of the partnership between the military and civilians in governing the country.

It stipulated the necessity of consensus between the two parties on reform, working to build a unified national army, and restructuring the committee to dismantle al-Bashir’s regime while reviewing its performance.

It also stressed the need to start a dialogue between all political forces to establish the constitutional conference, as well as to expedite the completion of all institutions of transitional governance.

Implementation of the Juba Agreement

It also stipulated the implementation of the Juba Peace Agreement and the completion of its entitlements, as well as ensuring the transfer of power to a civilian government on time.

The sources indicated that the agreement was prepared by joint legal committees from both parties.