Handicrafts greeted by the elderly at Qimam Mountain Arts Festival 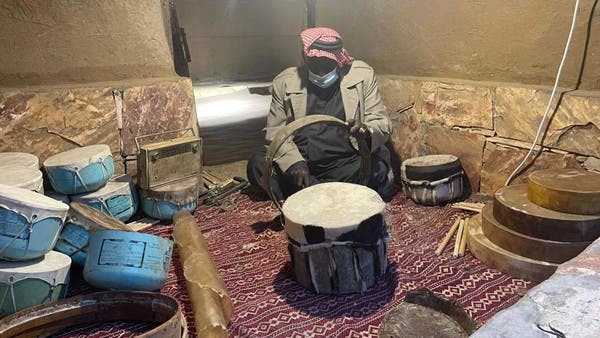 The ancient handicrafts received the attention of the Saudi Ministry of Culture, as they were remarkably highlighted at the Qimam Festival for Mountain Performing Arts in the Asir region.

Among these crafts, he made musical instruments, such as the drum, the zir, and the tambourine. In this context, “Uncle” Masoud Al-Suqur, a participant in the festival, told Al-Arabiya.net that he has been working in this craft for 50 years.

He added that since he was young, he was raised on making these machines, as he used to collect wood from tamarisk and figs for the manufacture of zir and drum, and he was also tanning and cleaning leather to be a cover for molds. Al-Saqour stressed that this profession is “tiring, but enjoyable for those who love musical instruments, and who have the spirit of the artist in them.”

He added that there are now factories specialized in the manufacture of tambourines, while he is dressing them, and he is also replacing the wooden base in the drum with an iron base so that it can bear to be tapped.

Al-Suqur said that the instruments that are made for orchestras are different from those made for young amateurs, explaining that the difference lies in the durability of the leather and the size of the instrument.

As for “Uncle” Gibran Al Marqi, who works in the stone carving craft to make stone cooking tools and utensils, he said that he has been working in this craft for 38 years.

He explained that the stone is extracted from the ground, and that there are specific places in some areas, especially Jazan and Asir, for that. Al-Marqi also said that carving stone tools lasts from two days to a week, depending on the size of the pots he is working on.

And he indicated that the process of extracting stones is the most tiring part of his work, as it needs to explore and extract stones from a depth of up to two meters underground. And about the most prominent utensils that he makes, Al-Marqi mentioned pans, jugs, cups, cups and incense burners.

It is worth noting that Qimam Mountain Performing Arts Festival has started since January 9 and will continue until January 15. The festival includes activities related to various arts such as cooking, fashion industry and visual arts, through plastic exhibitions in historical villages.