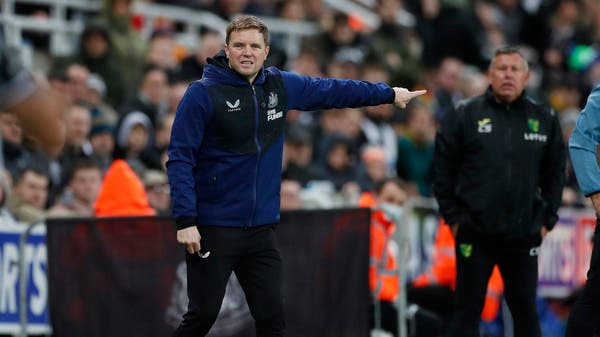 Newcastle United coach Eddie Howe called on his players, on Friday, to appear in the best possible way to take advantage of the severity of the dramatic exit of Manchester City, the leaders of the Champions League semi-finals, when it is a guest on Sunday in the thirty-sixth stage of the English Football League.

City was just around the corner and minutes away from reaching the final of the continental competition, before Real Madrid scored two goals and imposed two extra periods, during which they won 3-1 back at the Santiago Bernabeu stadium, compensating for a 3-4 first-leg loss.

The Premier League leader with 83 points, one point ahead of Liverpool four stages before the end, does not have much time to heal his wounds, as he receives Newcastle this week, while the Reds receives Tottenham in the top matches of this stage.

Howe believes that City may be weak after the devastating loss in Madrid, but at the same time warned his players of a possible backlash.

He said in a press conference before meeting his expected team: Things can go in both directions, and this can affect them emotionally from a positive or negative side.

He continued, “We have to prepare for the best Manchester City, so we must present the best possible image of Newcastle.”

Newcastle, ranked tenth with 43 points, and who avoided relegation at home, played against Liverpool in the last stage, but they were not able to destroy the hopes of German coach Jurgen Klopp’s men with a historic quartet of losing 0-1.

Howe is well aware that Newcastle must enter their match against City with the highest levels of focus and pressure if they are to put the sticks on the path of the champions and leaders, “Citizens”, describing the match as the most difficult test.

Turning to what happened against Liverpool: I was a bit disappointed with the performance last week and I thought we could have played better but we are still close. I hope we get closer this time.

Howe, who led the Magpies to four wins in a row before losing in the last stage, added: Our weakness against Liverpool was the lack of strength and intensity that we presented in recent months and was the hallmark of our success.