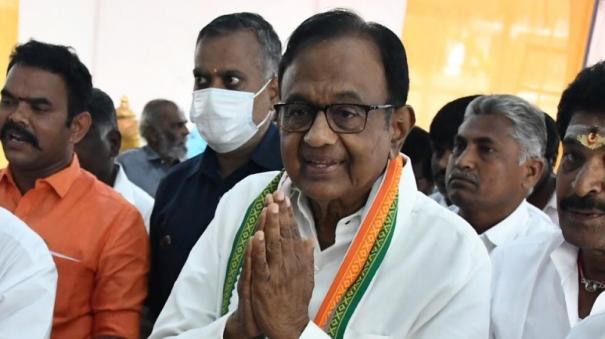 New Delhi: I am glad that the Supreme Court judge has pointed out the irregularities in the case against demonetisation. Former Finance Minister P. Chidambaram said that even if it is not a harsh reprimand or punishment, he is happy to have pointed out the mistakes.

On November 8, 2016, the central government announced that the Rs.500 and Rs.1,000 notes that were in circulation in the country at that time were invalid. 58 writ petitions were filed in the Supreme Court against this demonetisation move of the government. A five-judge bench of the Supreme Court gave its verdict today. Out of which 4 judges ruled for demonetisation and one judge ruled against it.

No implications of demonetisation were mentioned. The move has crippled growth, crushed small and micro industries, destroyed the informal sector and destroyed the livelihoods of millions of people.

It has not achieved any of its significant objectives like reducing money circulation, moving people to cashless transactions, curbing the circulation of counterfeit notes, curbing the financing of terrorism and unearthing black money.

The judgment of the majority judges only took into account the procedure of decision-making. Rather, it does not speak about the usefulness of the action. The Supreme Court’s decision to proceed with demonetisation is a completely wrong direction,” he said.

Former Union Finance Minister P. Chidambaram commented on the verdict on his Twitter page. In a series of tweets, he said, “Once the Supreme Court has given its verdict, we are ready to accept it. However, it is important to point out here that the majority of judges (4 Judges) who delivered the verdict did not consider the evaluations of the decision nor did they consider that the stated objectives had been achieved. In fact, the question of whether their goals were not achieved was clear. have explained.

We are happy that the judge who has ruled against the move has pointed out the illegality and malpractices of demonetisation. Although this is a minor blow to the government’s authority, we welcome it.

This judgment will also be discussed in a series of important dissenting judgments in the history of the Supreme Court. This judgment pointed out the difference between the parliament which makes the law and the government which implements it. We are happy to point out the importance of Parliament in democracy. I hope the government will not impose its disastrous decisions on the Parliament and the people in future,” he said.

Similarly, in a tweet issued by Priyanka Chaturvedi from the Shiv Sena party, Judge P.V., who had ruled against demonetisation, He said that he respects Nagaratna a lot.

We are happy that the minority judgment has pointed out the illegality and the irregularities in the Demonetisation. It may be only a slap on the wrist of the government, but a welcome slap on the wrist.