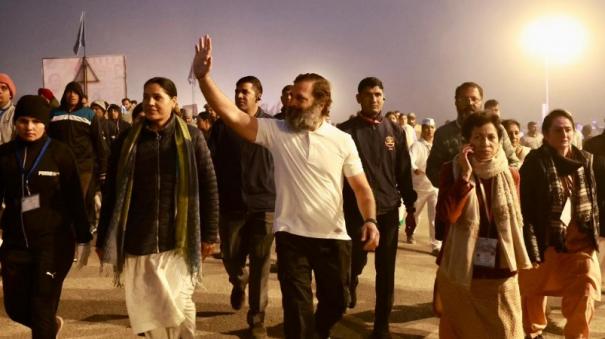 Congress leader Rahul Gandhi’s India Unity Yatra has once again reached Haryana. Rahul Gandhi, who has been trekking through various districts, reached Kurushetram on Sunday. In this situation, it was announced that today’s yatra will be held as Women’s Power Day in which women will participate. Accordingly, today’s yatra started again this morning from Kolian area of ​​Kanpur, Haryana.

There is heavy snowfall in northern states. A red alert has been issued for the state of Haryana due to snowfall. Despite this, the Indian Unity Yatra hung amid the light mist from vehicle lights in the morning. Many women participated in the Yatra along with Rahul Gandhi.

In a series of posts published on the official Twitter page of the Congress Party, “The light of love is illuminating India, tearing apart the darkness of hate. The Indian Unity Yatra begins with its first light, carrying the message of love for the people of Haryana.

The fog clears.. India joins. India’s Unity Yatra is moving forward, pushing away the fog of hate,” it said.

That’s today #BharatJodoYatra in @RahulGandhi Stepping up the journey with Ji.

Today’s day in Bharat Jodo Yatra is in the name of Mahila Shakti… pic.twitter.com/ZjNnWLSE8Y