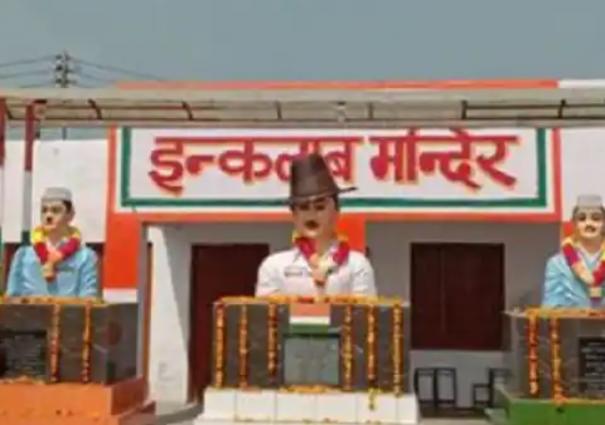 New Delhi: ‘Inkulab’ Temple for All Religions is located in Haryana. Revolutionaries who fought for the freedom of the country for the past 22 years are worshiped here.

The most popular slogan raised in the freedom struggle was ‘Hindu Zindabad (Long Live India)’. It was first raised in 1921 by the Muslim scholar Maulana Hazrat Moini.

A freedom fighter, Moini was a prolific poet and belonged to the Communist Party. His slogan became popular because Bhagat Singh, who was hanged during the freedom struggle, kept chanting it.

Later, Hindustan Zindabad prevailed as the official slogan of the Hindustan Republican Association, the Communist Consolidation and the All India Azad Muslim Conference.

Since then till today this Hindustan Zindabad slogan continues to be very popular among the public. Meanwhile, a temple named Inkulap has been built in Kumtala village of Yamunanagar district of Haryana.

It is a temple of religious harmony where revolutionaries are worshipped. People of all religions including Hindus, Muslims, Sikhs and Christians come and perform pujas here every day.

Lawyer Variyamsingh built this kind of temple for revolutionary soldiers 22 years ago which is not available anywhere in the country. It is customary for the families of those who have lost their lives in the Indian Army to visit this temple.

Due to the outbreak of the Meerut Sepoy Mutiny in 1857, Mangal Pandey’s family heirs Devi Dayal Pandey and Sheetal Pandey also used to visit this temple. The list includes Haryana’s Sports Minister Sandeep Singh and Indresh Kumar of the RSS.