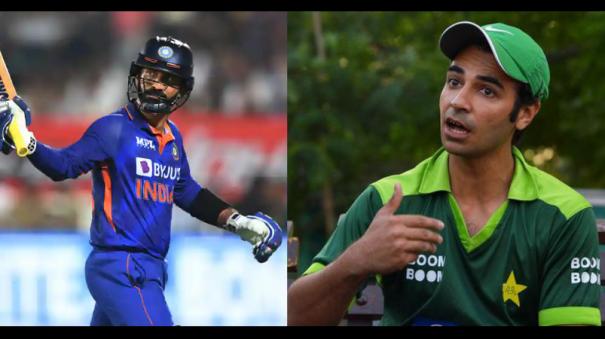 Former Pakistan cricketer Salman Bhatt has heartily praised Indian cricketer Dinesh Karthik as he cannot even play domestic cricket in Pakistan at his age. By this he has insulted the Pakistan Cricket Board.

37-year-old Dinesh Karthik recently made a comeback in the Indian cricket team. He has emerged as an indispensable batsman in the T20 cricket team. His role as finisher is clear. He has been playing well to suit that. In the first T20 match against West Indies, he scored 41 runs off 19 balls.

His comeback has been lauded by everyone from the greats of the cricket world to the former players. The latest person to join it is former Pakistan captain Salman Butt.

“Fortunately, Dinesh Karthik was born in India. Had he been born in Pakistan, he would not have even played domestic cricket here at his age.

Future bench strength of Indian cricket team is very strong. It seems obvious. Indians have built a quality team. The Indian team is full of talented young players like Suryakumar Yadav, Shreyas Iyer, Arshdeep Singh, Subman Gill. Look at the Pakistan team, there is a situation where they have to rely heavily on Shaheen Afridi,” said Bhatt.

India and Pakistan teams are going to play a multi-match series in the Asia Cup which will be held in UAE from 27th to 11th September.

In this case, this praise of Salman Bhatt is getting attention.