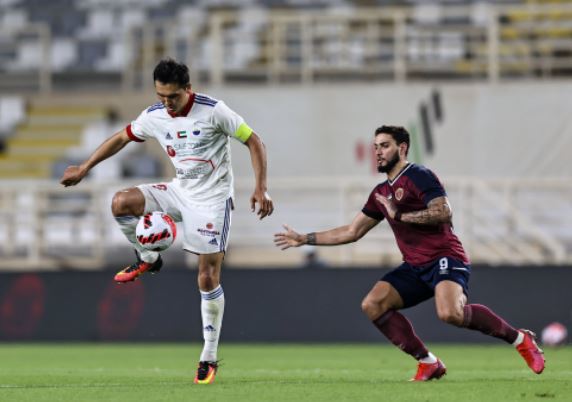 Al Wahda took a big step towards the competition for the ADNOC Professional League title, losing from Sharjah 1-2 in the match that brought them together at Al Nahyan Stadium today, and handed the “keys” to the title to Al Ain, who, if he beat Al Dhafra, would have widened the points difference between him and Al Ain. Burgundy to 10 points.

The owners of the land did not benefit from the advantage of advancing over their guest with the goal of Portuguese Adrian Silva, “23”, so that Sharjah returned from afar and scored two goals through its Congolese star Ben Malango “38 and 45 + 1”.

Al-Wahda entered the first half in a weak position, and regressed without justification to the defense, which gave Sharjah the advantage at the level of possession and threatened the goalkeeper, Mohammed Al Shamsi, who prevented a goal scored on his team by Bernard alone.

Despite the state of Al Annabi in this half, he succeeded in the only attack on Sharjah’s goal of scoring, after a break from the attempts made by Omar Khribin, to reach the ball in the end to Adrian Silva, who shot tightly from the edge of the box into the net.

Sharjah showed a strong reaction and pressured all its lines to equalize, so that Ben Malango succeeded in exploiting the ball and his link from Bernard, while he was at the goal gate, and he did not find it difficult to score from it. Ben Malango returned from a set ball to score the advance goal for his team, taking advantage of another defensive lapse from Annabi’s defense, and headed the ball to the left of the goalkeeper.

While many expected the improvement of Al Wahda’s performance in the second session of the match, Sharjah continued to excel and missed the opportunity to score a third goal, from a cross played by Bernard, and Luan Pereira pounced on it, but the ball passed along the left post.

The performance of the offensive unit improved with the 53rd minute, but he was unable to penetrate the organized defense of the Sharjah team, which threatened the owners of the land in more than one counter-attack, the most prominent of which was the sole substitute, Othman Kamara, but they all passed safely on the goalkeeper.