He was stuck in a Saudi desert for two days.. A Sudanese video, “Welcome to the fear.” 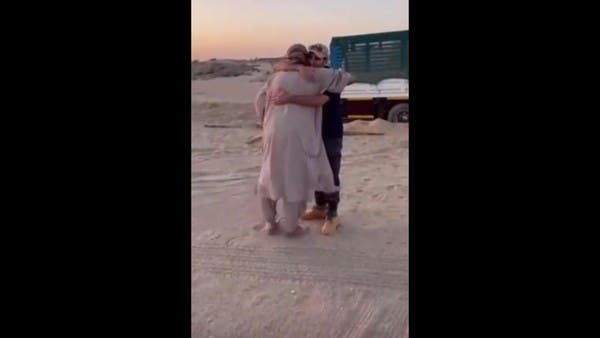 “Welcome to Faza’a.. Welcome to Fazaa.” An orphan phrase repeated by a man tirelessly or bored, expressing his overwhelming joy after being stuck for two days in the Rabigh desert in Saudi Arabia.

During the past two days, a video of a Sudanese driver, whose vehicle apparently got stuck in the sand, spread on social media, and he waited for hours, before cars came to his rescue, so he kept repeating in disbelief that the door of hope was finally opened for him after a long wait. .

The driver had taken a desert road coming from Riyadh to deliver a shipment of fodder to Rabigh. He traveled 50 kilometers in the desert, but his vehicle sank in the sand, and he could not complete his journey, until a volunteer team came to his rescue.

The Barq Rescue Team posted on its Twitter account a video of the Sudanese resident, whose name was not known, but his joy amazed everyone who saw the video clip that spread like wildfire, especially after the man started to ululate as well!

It is noteworthy that “Barq Rescue” is a volunteer team in the Saudi Civil Defense, a member of the International Organization for Voluntary Efforts, and it specializes in volunteering four-wheel drive owners in the Kingdom, according to the definition published on their official Twitter account.