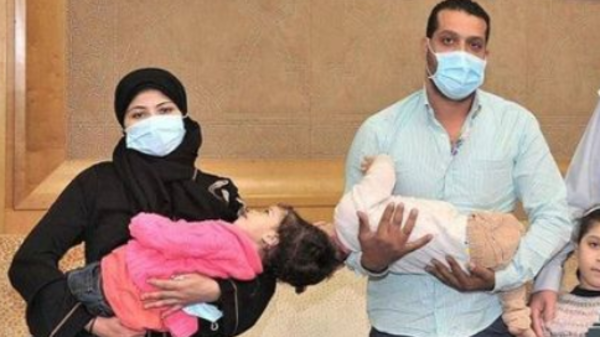 Any action or movement that you should have done together, undoubtedly hindered the growth of the two young girls “psychologically” and kinesthetically.

However, things will turn upside down in the coming hours for the two girls, as they will undergo a separation process in Riyadh.

The two girls arrived last Tuesday to the Saudi capital, accompanied by their parents, for the separation process

“The coming days are feast”

This came after the Custodian of the Two Holy Mosques, King Salman bin Abdulaziz, directed a few days ago an operation for the Egyptian Siamese twins in the Kingdom.

The twins were transferred from Cairo to Riyadh, and upon their arrival they were deposited at the King Abdullah Specialist Children’s Hospital at the Ministry of National Guard to study their case and consider the process of separating them.

While the father of the two girls expressed his thanks to the Kingdom for this generous initiative, their mother assured Al Arabiya that what she feels is indescribable, saying, “The coming days are Eid… Eid.”

It is noteworthy that this twin is the 118th case that came from 22 countries around the world to Saudi Arabia, where it was studied within the Saudi National Program for Separating Twins.