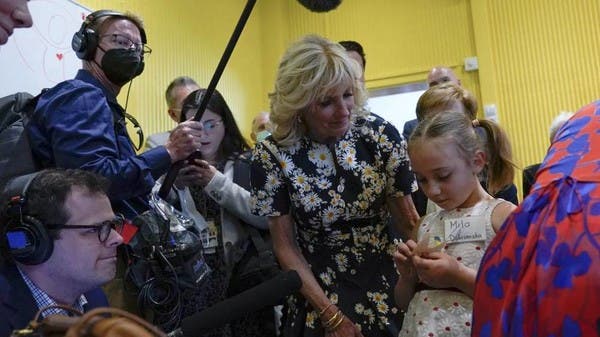 On Saturday, Jill Biden, the wife of the US President, met a group of Ukrainian refugee mothers and teachers in the Romanian capital Bucharest, where she praised the strength and resilience of women.

Jill Biden heard “heartbreaking” accounts, Saturday, from Ukrainian women and children who fled war in their country and found safe haven in Romania.

While watching children draw letters on scraps of paper, she saw a Ukrainian girl writing: “I want to go back to my father.”

Biden later told reporters that the girl’s words were “heartbreaking.”

One mother told Jill Biden the story of her horrific escape, after spending weeks in a cold basement with her traumatized 8-year-old daughter.

“I think mothers would do anything for their children,” Biden told the Ukrainian women. “I think you are incredibly strong and resilient.”

While visiting a school hosting fleeing Ukrainian children, she said: “In many ways, the teachers are best able to help these children deal with trauma and feel normal.”

She added that she saw a glimmer of hope among the families, who “are all aware of the grants that the United States has given to Ukraine, to refugees abroad, and to Romania to support refugees.”

Jill Biden, who teaches English and writing at a community college in Virginia, is on a tour of Romania and Slovakia, where she also meets US soldiers and refugees.

Since Russia began its military operation in Ukraine, nearly 910,000 Ukrainians have fled to Romania, where charities, local authorities and government agencies work alongside thousands of volunteers to provide food, shelter and transportation.

While many have traveled to countries further afield, there are still about 80,000 in Romania, mostly women with young children.
Accompanying President Joe Biden’s wife was Romania’s first lady, Carmen Iohannis, who is also a teacher.