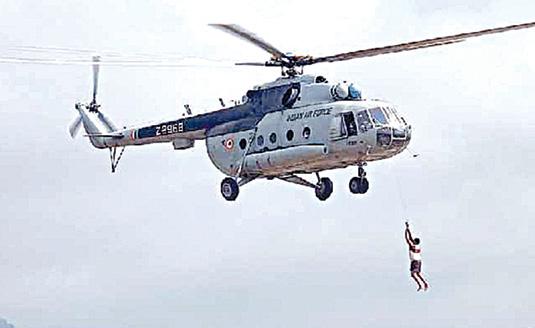 Many lakes have broken and crops have been submerged. The Niva River flooded in Chittoor district. In this, a large number of cattle in Chittoor were swept away before the eyes of the people. Many who saw this left in tears.

As the Kalyani Dam overflowed, 2 canals were opened. Thus from Tirupati on the Suvarnamukhi river to Tada in Nellore district Flood Occurred. Cars, bikes and livestock were swept away in the floods. In Anantapur district, 6 people went to rescue 4 people who were trapped in a car due to floods. Then they too were caught in the flood. Then 10 people were rescued by helicopter.

Floods are rampant everywhere in Thirumalai. The temple has announced that the hills will be closed daily at 6 pm until the rains subside.

For heavy rain Andhra So far 17 people have died in the bow. In Rajampet, Kadapa district, 3 government buses were stranded in Nandalur near Satyavathi river yesterday. Of these, 12 were recovered as corpses. The task of looking for others has intensified.

A total of 17 people, including 5 others, were killed in floods and electric shocks in Tirupati and Nellore. More than 30 are missing.

Andhra Pradesh Chief Minister Jaganmohan Reddy yesterday held a video conference with district collectors on the impact of the floods. The Chief Minister ordered to expedite the rescue and relief operations. He also ordered to provide financial assistance of Rs 5 lakh each to the families of the deceased.