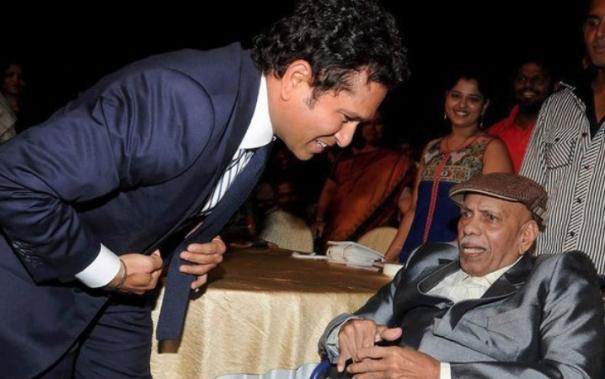 Mumbai: Sachin Tendulkar, one of the legends of the Indian cricket team, paid tribute to his guru Achrekar today on his death anniversary.

Sachin played international cricket for the Indian team from 1989 to 2013. He ruled the cricket field with his bat for about 24 years. Through this, he has played 664 international cricket matches and accumulated 34,357 runs. In this he has scored 100 cents. He has also taken 201 wickets. Although Sachin achieved many such feats, it was Achrekar’s training that laid the foundation for it. Achrekar was also Sachin’s first cricket coach. Sachin was just 10 years old when he started training with him.

Sachin failed to impress his coach Achrekar at the first opportunity. However, he impressed with his ability at the second opportunity. After that everything became history. Sachin took lessons in cricket at Shivaji Park in Mumbai. He learned the tactics of cricket from him. Achrekar gave him intensive training morning and evening.

Achrekar used to reward the bowler who destroyed Sachin’s stumps with a 1 rupee coin. Perhaps the coin will go to Sachin if no one gets him out. Later, at the age of 16, he joined the Indian team and brought glory to Guru.

He passed away due to old age on 2nd January 2019. Many cricketers participated in his final journey. Sachin shared his tribute to Guru on Twitter.

He taught me technique, discipline and most importantly, to respect the game.

I think of him every day. Today, on his death anniversary, I salute the Dronacharya of my life. Without him, I wouldn’t have been the same cricketer. pic.twitter.com/JQ8uijHD9Y