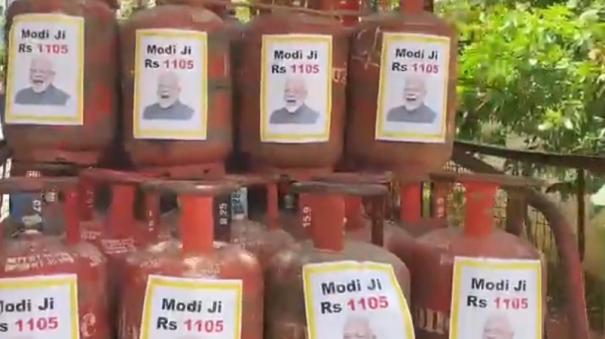 Hyderabad: Telangana Minister KTR reacted with satire to Union Finance Minister Nirmala Sitharaman who questioned “Why there is no Prime Minister Modi film in fair price shops in Telangana”.

Union Finance Minister Nirmala Sitharaman yesterday conducted a surprise inspection at a ration shop in Birgarh, Kamaretti district, Telangana. Nirmala Sitharaman asked District Collector Jitesh Patil why there was no picture of Prime Minister Modi on the banner there. Also, “One kilogram of ration rice given monthly to the people by the central government is about Rs. The price will be up to 35. People buy this at the rate of one rupee per kilogram of rice. The state government spends Rs.3.30 per kg. The central government spends the remaining Rs.30.70 cents. Even the cost of transportation is borne by the central government.

But in Telangana, the state government claims to provide this rice to the people. During Corona, the central government provided rice for free. But the district collector knows nothing. A banner with PM Modi’s picture should be placed in front of the ration shop by evening. Otherwise I will put up a banner myself. Study IAS and be loyal and fair to the Central Govt. Do you understand?” He said. The video went viral on social media.

He has also criticized Union Finance Minister Nirmala Sitharaman’s action and retorted, “BJP-ruled states should put up a banner thanking Telangana for the high tax paid to the central government.”