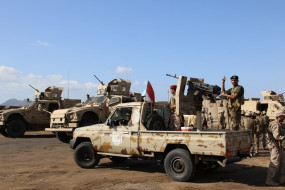 At the press conference, he showed pictures of Hezbollah members training Houthi militias to launch explosive-laden drones. The spokesman said that since the start of the war in Yemen in March 2015, the Houthis have attacked the kingdom with 430 ballistic missiles and 851 bomb-laden drones, killing 59 Saudi civilians.

The Houthis are targeting various regions of Saudi Arabia, especially border cities and important installations, such as energy facilities and airports. Most of these attacks were stopped before they could reach their target. Recently, the coalition has been conducting airstrikes on Houthi military bases in Yemen to deter militias from launching attacks.