IndiaHimanta Biswa Sharma to be included in Assam BJP candidate list: Will...
India

Himanta Biswa Sharma to be included in Assam BJP candidate list: Will she be declared Chief Ministerial candidate? 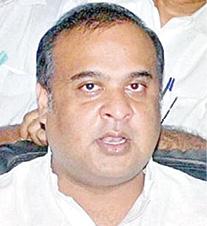 Assam is ruled by the BJP led by Chief Minister Sarpanch Sono. Elections to the state legislature are scheduled for March 27, April 1 and 6 in three phases.

Elections are being held for a total of 126 constituencies in Assam. The BJP yesterday announced the list of 70 candidates for the first phase of the elections. In it, the Cabinet Minister Himanta Biswa Sharma The name featured has gained prominence.

Sharma, who quit the Congress in 2015, joined the BJP. He then contested and won the 2016 elections on behalf of the BJP. He was then given the post of Minister. The BJP has also appointed Himanta Biswa Sharma as the co-ordinating chief of the North Eastern States. He is also rumored to be the next Union Minister. But the announcement that he will contest the Assam elections has put an end to all speculations.