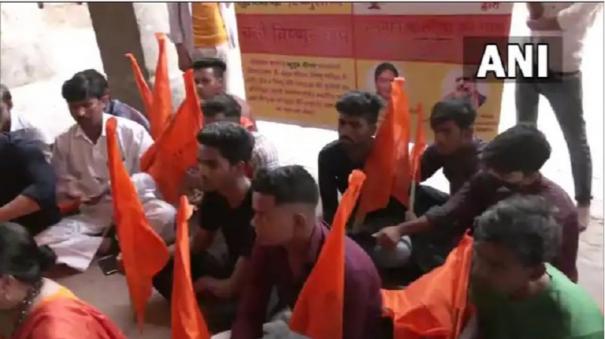 New Delhi: The Hanuman mantra was recited in front of the Qutub Minar by a Hindu organization in Delhi. They also demanded that the name be changed to ‘Vishnu Minar’ after it was built by King Khilji.

The Khilji dynasty ruled India before the Mughal Empire. Qutbuddin Ibn Bakr, the first king of the Islamists, also known as the Sultans of Delhi. It was built by this Khilji dynasty king in 1198 and was completed in Delhi. Currently located in the Mehroli area of ​​Delhi, this historic site is owned by the Archaeological Survey of India of the Central Government.

Qutub Minar, an international tourist destination, has recently been targeted by Hindutva organizations. Thus, the Hindu organization Maha Kal Manav Seva, which had gathered yesterday in front of Qutub Minar, suddenly gathered. The group of about 20 people was led by a monk named Jai Bhagavan Goyal.

He was accompanied by young men in saffron robes and flags of the same color. As they chanted ‘Jai Shriram’, they entered the Qutub Minar premises and sat in front of its gate.

Then, everyone started chanting Hanuman Mantra in one voice. This can be seen as fun by the crowd of tourists who came there.

Jai Bhagwan Goyal, the leader of the Hindu organization, who spoke earlier, said, “The building was constructed on the land of Sanatana Dharma after demolishing Jain and Hindu temples. Thus, the name of Qutub Minar should be changed to Vishnu Minar. The names of the areas bearing the Muslim name in Delhi should also be changed to the names of the Hindus. Until then, our struggle will continue peacefully like this. ”

As a result, Delhi police rushed to the spot and dispersed the crowd. Some of the Hindu activists were arrested and taken to the police station for questioning. Of these, only Jai Bhagavan Goyal is being prosecuted. Later, additional police were deployed in front of the Qutub Minar to strengthen security.

Similarly, the controversy over Hindu organizations in Qutub Minar has increased. At the entrance of the Qutub Minar is a mosque called ‘Quwatul Islam (Power of Islam)’. Hindu organizations have been complaining for years that the mosque, which is frequented by Muslims, has been demolished to make way for 27 Hindu temples. Some leaders of the Delhi BJP have also joined the ranks.

Arthisingh, a BJP member of the Mehroli Municipal Ward, had insisted that the idols of Hindu deities inside the Qutub Minar were placed on the ground in an insulting manner and that they should be replaced and placed in a suitable place for worship.

Last December 2020, a petition was filed against Qutb Minar in the Civil Court of Delhi by a monk named Rishabh Dev, a Hindu monk. The case was dismissed by Judge Neha Sharma citing the Federal Government’s 1991 Protection of Places of Worship Act.

The law was enacted by former Prime Minister PV Narasimha Rao in connection with the pre-independence Ayodhya Babri Masjid and Ram Temple. Thus, places of worship throughout the country will continue to exist after independence. It cannot be modified or claimed by pagans.

However, in this case, the monk Rishabh Dev has appealed to the Delhi District Additional District Court. This case is also coming up for hearing soon.