His agent: Coronado wants to end his career with Al Ittihad Jeddah 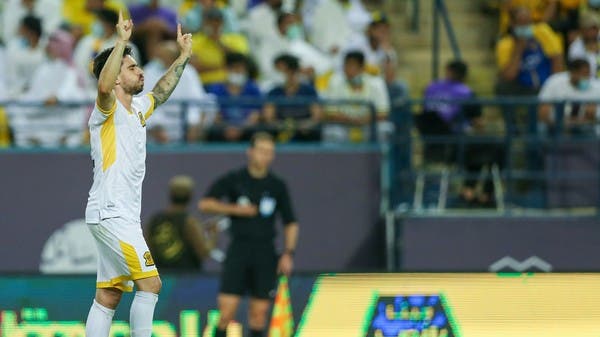 Desi Brandino, business agent and lawyer for Igor Coronado, the star of the Jeddah Union, revealed that the Brazilian player wants to continue as long as possible with his team, especially in light of his harmony with the team, which contributed to providing distinguished levels, pointing out that the player received several offers in previous times, except The Saudi club managed to settle the deal.

And the 29-year-old playmaker moved last July to Al Ittihad Jeddah, coming from the Emirati Sharjah, with whom he won the UAE League title, and also won the award for the best player in the competition.

And about his new experience in Saudi Arabia, his agent told Al Arabiya.net: “The transfer of Coronado to the Jeddah Federation represents a new experience for him that is completely different, especially in light of the masses that the club enjoys, and Igor was able to harmonize and enter the team’s atmosphere as soon as possible, due to The support and support of his fellow players, especially his compatriot Romarinho, with whom he has a good relationship off the pitch and always spends time with him.

She added: Coronado was impressed by the audience that Al-Ittihad enjoys, which contributed to providing his best with the team. The fans love football and you have to always be at your best, and to be respected you also have to live up to their ambitions which is something Coronado is aware of.

Desi pointed out that the Brazilian playmaker is impressed by the team’s fans, and she explained: He always talks about the huge number that is in the stands, in addition to the support he finds in social media, although he does not prefer to follow “Social Media”, because he focuses more on working within The pitch, but he can always find fans of the club wherever he is in Saudi Arabia as well.

During eight matches in the Saudi League, Coronado scored four goals and made eight goals for his teammates.

And regarding the process of his transfer to the Federation last summer, his Brazilian business agent stated: The management of the Jeddah Federation managed to settle the deal last summer, because it made it clear to the player that there is a sports project and a clear work, and Coronado was open to the issue of playing in the Saudi League, being one of the strongest continental competitions. .

And she continued: The brilliance in a competition such as the Saudi League always makes eyes turn to the player, especially for professionals, and indeed there are many contacts about Coronado, but I always tell them that Igor is currently focused on achieving his goals with Al-Ittihad, and frankly, he is seriously considering continuing for longer. A possible period with his current team, and perhaps ending his career there, because he is the type of player who prefers stability and not frequent transfers between clubs.

Regarding the attractiveness of the Saudi League, she said: Without a doubt, the league there has become one of the strongest in the region and the continent of Asia, and everyone wants their players to be present in the competition, because it has developed a lot in light of the clubs’ dependence on a large number of players, and the clubs there enjoy With a large audience, in addition to the fact that Saudi clubs have strength on the level of the continent.