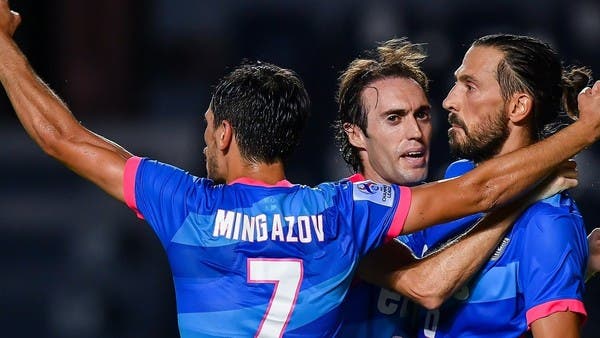 Kitchi made history after becoming the first team from Hong Kong to qualify for the West Asian Champions League semi-finals, by snatching a dead-time tie against Japan’s Vissel Kobe 2-2 on Sunday in the last round of Group Ten competitions.

Kitchi needed a tie point to reach the price of the final, accompanied by Kobe, for this group, whose number of teams was reduced to three after the withdrawal of the Chinese Shanghai Port as a result of a new wave of the outbreak of the Corona virus and the accompanying tightening of travel procedures.

But it seemed that Kichi’s hopes of achieving the achievement evaporated when Yoshinori Muto put the Japanese team in the lead three minutes before the end of the match in Buriram, Thailand, which hosted the competitions of this group.

But similar to what happened at the end of the first half when Vissel advanced through Brazilian Lincoln (44 from a penalty kick), before Montenegrin Dejan Damjanovic responded from the penalty spot as well (45 + 3), Kitchi snatched the equalizer in the first minute of stoppage time through the Spaniard Raoul. Baina (90+1), to go down in history as the first team from Hong Kong to reach the final price of the continental competition.

Kitchi raised his score to 7 points in second place, a point behind his Japanese rival, who in turn decided his card, while the Thai host Chiangrai United came third with only a point.

Baena’s expulsion in the fourth minute of stoppage time for the second half, as a result of receiving a second warning, did not disturb Kitchi’s joy of achieving this achievement and qualifying for the final price among the three best runners-up teams in the five groups for the East Asian region.