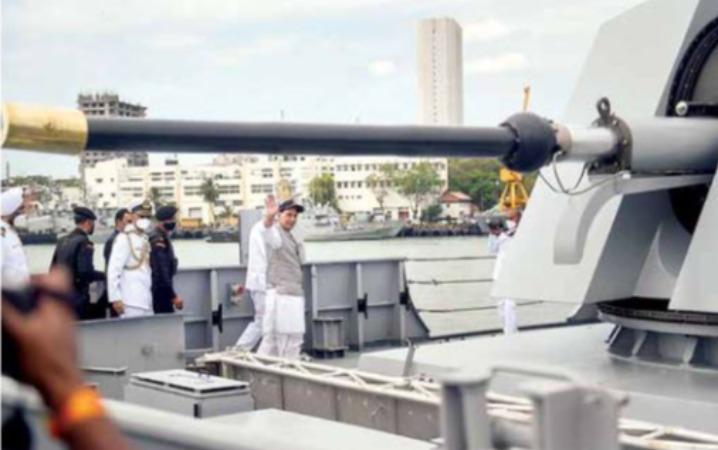 “Some countries are acting irresponsibly in violation of UN maritime laws,” the Federal Reserve said. Minister Rajnath Singh He alluded to China yesterday.

The Federal Department of Defense is implementing a program to build 4 state-of-the-art warships under the name 15B. Accordingly, the first sophisticated warship, INS Visakhapatnam, was built and completed at the Mumbai shipyard. Thereafter, various phase tests were successfully conducted and completed.

The 7,400 tonne domestically built warship Vizag was attached to the Navy yesterday. The ceremony was held in Mumbai yesterday.

UN Security Council calls for immediate end to hostilities Has laid down international legal plans. They are being followed by the international community. At the same time, the UN Some countries (China) are operating with a narrow mindset that misinterprets maritime law plans. Thus the UN. Attempts are being made to weaken the laws of the sea.

Some countries think to dominate certain sea areas. All countries must find a solution to that problem. We need to uphold safe international maritime law. Thus Minister Rajnath Singh Spoke.

This has been strongly opposed by many countries, including the United States and India. Countries such as Malaysia, Vietnam, the Philippines, and Taiwan also celebrate the South China Sea.

It is in this context that ‘some countries act irresponsibly’ Minister Rajnath Singh Has spoken indirectly.

The INS Visakhapatnam warship, which is currently enlisted in the Navy, is equipped with a wide range of missiles, submarine destroyer rockets, radars and sophisticated communications equipment.

Also, supersonic sensors are available. The warship has various special features such as sophisticated guns and electronic warfare equipment.