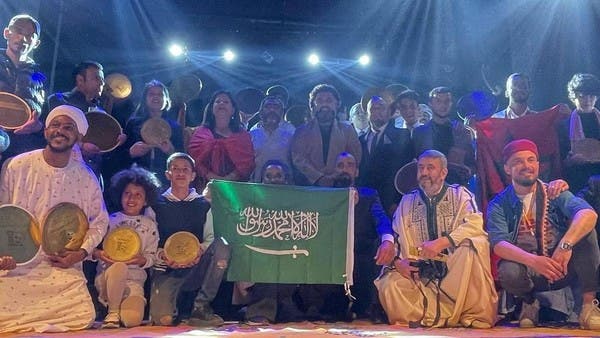 After her creativity in the play Free Prisoners, a member of the Choir Theater Club, Saudi artist Hanadi Al-Thunayan won the Outstanding Performance Award in the official competition at the Chaambi International Festival for Contemporary Theater in Tunisia for her role in the play “Free Prisoners”.

Speaking to Al Arabiya.net, she confirmed that she focuses on highlighting the role of young men and women and their talents in enabling the efforts of Vision 2030 for a responsible, talented and productive society.

She said that Tunisian artists showed great interest in exchanging cultural knowledge, especially with regard to theatrical culture, during the period of the Chaambi International Festival for Contemporary Theater, noting that the cooperation took place some time ago before we even participated in the festival, where artist Nizar Kachou, director of the Research and Development Laboratory in Street Theater, presented In the Republic of Tunisia, she has taken a number of intensive courses related to street theater for members of the theater choir club, to which she belongs.

She also stressed the importance of the participation of Saudi artists in Arab and international works in order to achieve self-confidence and knowledge of other experiences, and to convey his voice to the world, and to know the latest developments in the cultural, artistic and tourism movement as well, and to establish joint agreements and introduce the world to the artistic and cultural movement in Saudi Arabia.

“We, as Saudi artists, have a message that lies in correcting mixed or unclear concepts in other peoples, and participating in international festivals is an opportunity to clarify and share knowledge,” she added.

As for her most important works, she explained that she presented two important works for her, and every step developed her artistic abilities in the field of acting, the first of which was the play “Omniyat” with director Fahd Al-Asfour. The second is the play “Free Prisoners” directed by Turki Baissa, which she participated in in the Chaambi International Festival in Tunisia, and received a certificate of appreciation for the best outstanding theatrical performance.

About her most important future aspirations, she said that one of her most important priorities is to reach globality and participate in local and Arab works, spread and obtain technical training and refine her talent, and access to opportunities to engage in various artistic works, and to complete what she started in 2017, which is to highlight tourism through art and motivate the generation to Discover their talents by going through experiences.

She also made it clear that she is part of the choir club’s theater team as the head of the talent discovery committee, and that she aspires to complete her goals as a tourist guide.