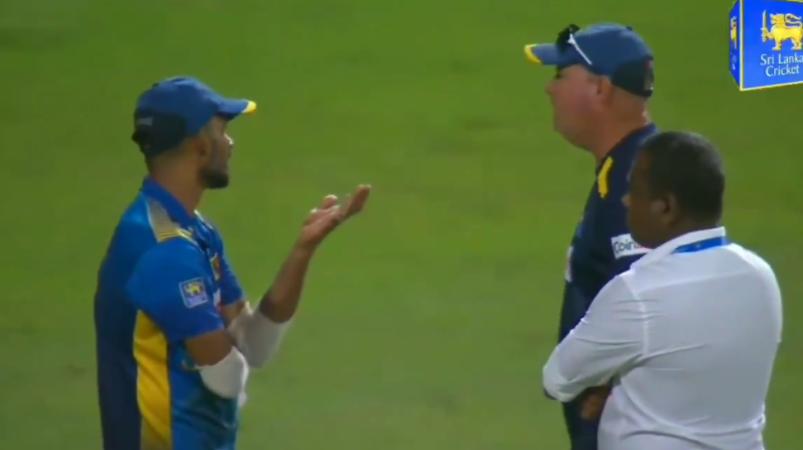 During the 2nd ODI against India in Colombo yesterday, the clash between Sri Lanka captain Sanaka and coach Arthur at the ground caused a stir.

At one point the Indian team was on the verge of defeat with 193 runs for the loss of 7 wickets and the game went to the Sri Lankan side. However, the victory was lost as the Sri Lankan bowlers failed to retain it. Deepak Sahar and Bhuvneshwar Kumar used the opportunity to put the team on the winning side with 68 runs in the last 10 overs.

Deepak Sahar won the Man of the Match award for his unbeaten 69 off 82 balls.

Mickey Arthur, the coach of the Sri Lankan team who could not accept the defeat, came to Captain Sanaka who was standing on the field after the match and talked about something. The conversation between the two turned into an argument in a few seconds. The two spoke warmly to each other as could be seen in their facial expressions.

Then Captain Sanaka looked at Coach Arthur and said something angrily, and he immediately left and went to the lounge.

Commenting on the incident, former Sri Lankan Russell Arnold said on his Twitter page, “The argument between Sri Lankan captain Sanaka and coach Arthur may have taken place in the lounge. The two should have avoided arguing on the ground like this. ”

In a video captured by the BCCI, the goalies watched the match on television in Durham and jumped for joy at the victory.

Virat Kohli commented on Twitter, “The biggest hit is the boys. You have succeeded in recovering from a difficult environment. Nice to see you. Deepak Sahar and Surya batted well despite the crisis. ”

To confront the Taliban, Kabul imposes a night-time curfew in 31 provinces

Shriya left the photo to make private parts visible .. Heat on social media that there is no dress

Maricarmen Marín speaks after being absent from I am