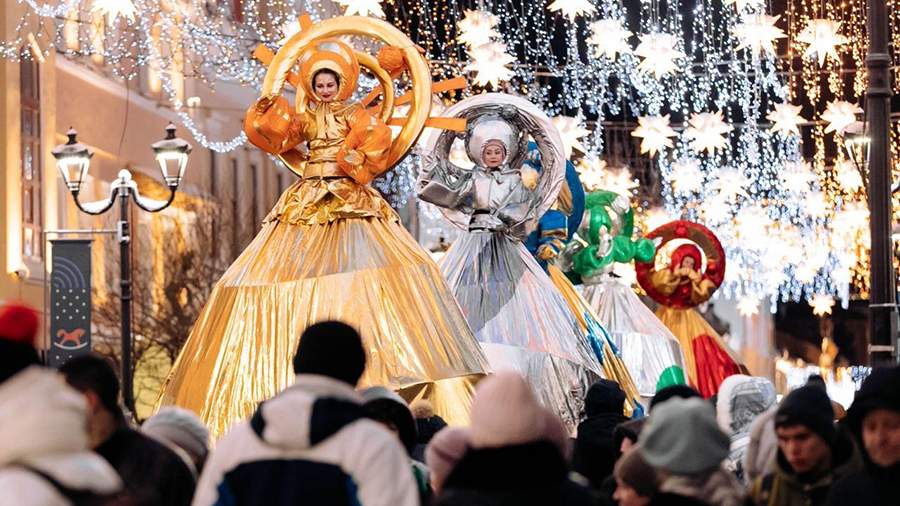 More than 250 thousand tourists have visited the Nizhny Novgorod region since the beginning of December. 120 thousand came to the region for a long weekend. This year, Nizhny Novgorod received the status of the New Year’s capital of Russia. The city celebrated the holidays on a grand scale: with ice shows by Ilya Averbukh, 3D performances, fairs and interactive installations. Titled Russian figure skaters Alina Zagitova, Evgenia Medvedeva, Adelina Sotnikova, Roman Kostomarov and others performed before the townspeople and guests. What else did Nizhny surprise vacationers with – in the material of Izvestia.

The tradition of choosing the capital for the New Year holidays is 10 years old. In 2012, Kazan received this status for the first time. It was followed by Vologda, Vladimir, Tambov, Ryazan, Sortavala, Khanty-Mansiysk, Tula and Kaluga.

Nizhny Novgorod, which became the anniversary holder of the title, passed it to the next capital – Novosibirsk. On January 9, at the Nizhny Novgorod fair, Mayor of the city Yuri Shalabaev presented the deputy head of Novosibirsk, Anna Tereshkova, with a snowflake made in the technique of Kazakov filigree, one of the crafts of the Nizhny Novgorod region. Now this souvenir can become a passing symbol of the New Year’s capital.

The transfer of the snowflake summed up the festive marathon, which began in Nizhny on December 11th. On this day, along the main street of the city – Bolshaya Pokrovskaya – a parade of fairy-tale heroes passed to the sounds of the provincial orchestra. The final destination of the procession, which brought together 150 artists and more than 3 thousand spectators, was the city’s main Christmas tree – Gorkovskaya, lit by Father Frost and Snegurochka.

A week before the New Year, the main location of the celebration was opened – the square in front of the Nizhny Novgorod Fair. A gala concert was held here, staged by director and athlete Ilya Averbukh. At first, the best Russian figure skaters performed at the rink, and the next day it was opened to everyone. More than 20,000 people have visited the ice rink, according to city officials, and it will remain open until March.

On Bolshaya Pokrovskaya, street theaters worked all the holidays. Closer to Christmas, folklore characters appeared – the Moscow collective “Bright People” arranged a theatrical costumed promenade for residents and guests of the city. Artists created figures of magical fairies and a dragon that towered over the crowd and played their own shows.

For a week – from January 2 to January 8 – 44 thousand spectators watched the ice ballet “The Nutcracker and the Mouse King” directed by Ilya Averbukh. He invited Oksana Domnina, Roman Kostomarov and Ekaterina Bobrova to the main roles in the show. 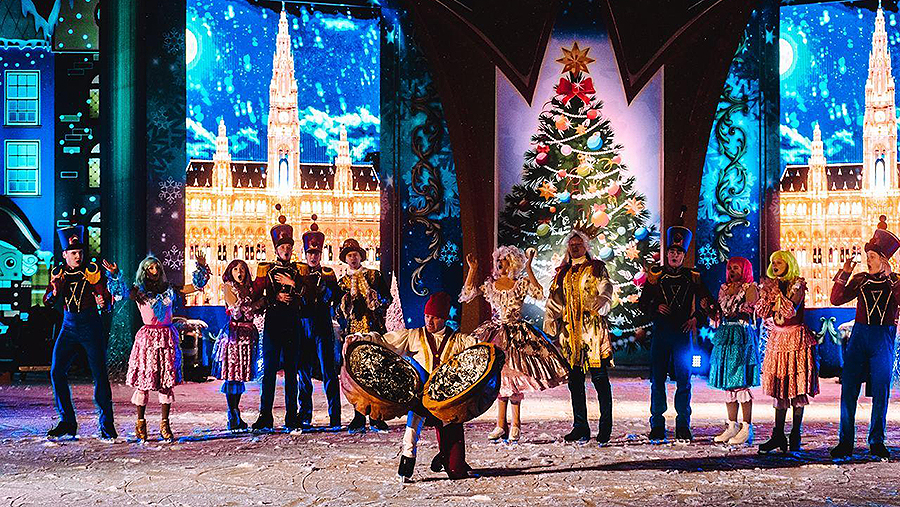 “The tale of Hoffmann is deep and multifaceted,” said Ilya Averbukh. “But we, in fact, created a new fairy tale with a new plot based on a familiar story. This production has a special place among our shows. It is full of wonderful transformations and discoveries.

Another gift is the performance “Sleeping Beauty. Legend of the Two Kingdoms. It was directed by Tatyana Navka. The main role was played by Alina Zagitova. The show was shown on January 9 on the square in front of the fair, and the building became a theatrical scenery: 3D projections were replaced on the facade, which complemented the plot.

At the end of last year, a temporary residence of Father Frost was opened in Nizhny Novgorod. In a special pavilion at the Nizhny Novgorod fair, children and parents were greeted by fairy-tale characters. The pavilion worked from December 25 to January 9, during which time more than 12 thousand guests visited it.

Other places in the city have also become points of attraction. In the evenings, a laser mapping show was held in the Kremlin: videos “Journey to a Fairy Tale” and “New Year’s Portal” were projected on the Dmitrievskaya and Nikolskaya towers. The performances lasted until midnight. 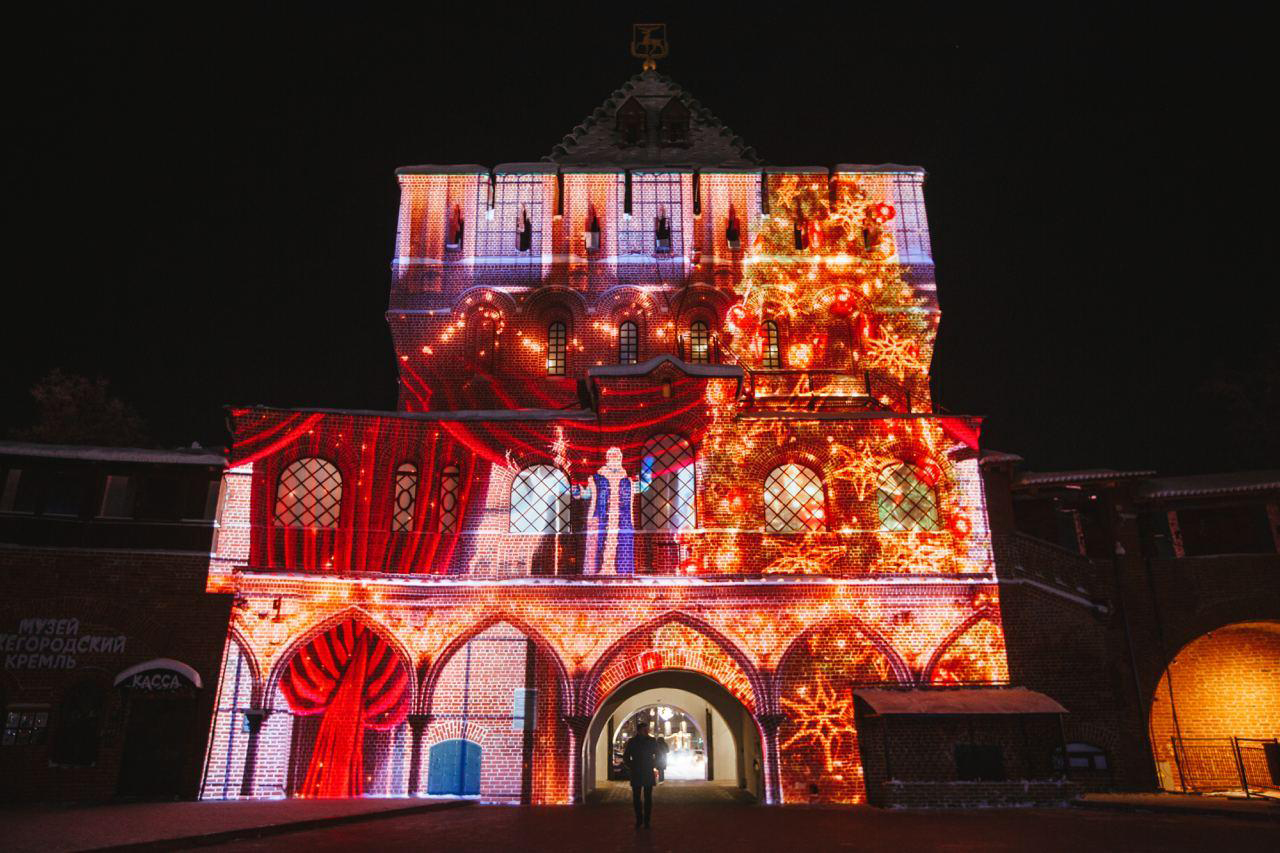 In the afternoon, the Kremlin arena showed an immersive performance “The Forge of Snowflakes”, for which the Nizhny Novgorod residents came up with an original legend. Another epicenter of the holiday was the “Switzerland” park, renovated and landscaped for the 800th anniversary of the city. The guests were met by artists and animators, fairs were located on the alleys decorated with illumination. A juggler show was organized in the park, and the New Year’s Express took children along the ring route. For fans of sports and a healthy lifestyle, “Switzerland” offered two skating rinks, a curling area, master classes and walking routes.

The festive marathon in Nizhny Novgorod did not end after the holidays. The skating rink in Switzerland Park will continue to operate until March 8, and in the square in front of the fair until March 13. Until January 30, the exhibition of interactive installations KUFLEX # 1 will last in the multimedia art space TSEKH.

The city spent about 327 million rubles allocated from the regional budget for the preparation of New Year’s events. About 100 million spent on the creation of holiday locations in each district. A five-meter carousel and street decorations worth 60 million rubles were additionally donated by the Moscow government. Part of the cost is compensated by numerous tourists who came to Nizhny for the weekend.

In 2021, the holidays cost the city 156 million rubles, but this year the city received a special status and relied on entertainment of a qualitatively new level. All activities were free. Tickets for 50–100 rubles were sold only for The Nutcracker in order to fill the venue in an organized manner. As a result, 44 thousand tickets were sold out in minutes.

According to statistics, more than 120 thousand tourists came to the Nizhny Novgorod region for the New Year holidays. During the festival period – from December 10 to January 9 – the total tourist flow to the region amounted to more than 250 thousand people. This is 25% more than last year.

“2021 has become a year of incredible concentration of various events and projects for the Nizhny Novgorod Region,” says Gleb Nikitin, Governor of the Nizhny Novgorod Region. — The 800th anniversary of Nizhny Novgorod allowed us to find new formats for holding festive events. A number of public spaces have been renovated and new venues have been created. All this made it possible to celebrate the New Year in the most large-scale and interesting way in the status of the “New Year’s capital of Russia”. We received a huge amount of positive feedback, guests came from all over Russia and from abroad. Many people came specifically to see what the New Year’s capital has prepared. According to preliminary estimates, the tourist and excursion flow in the Nizhny Novgorod region over the past holidays exceeded 120 thousand people. On peak days, hotels were almost completely occupied. All this has become a good help for small and medium-sized businesses. 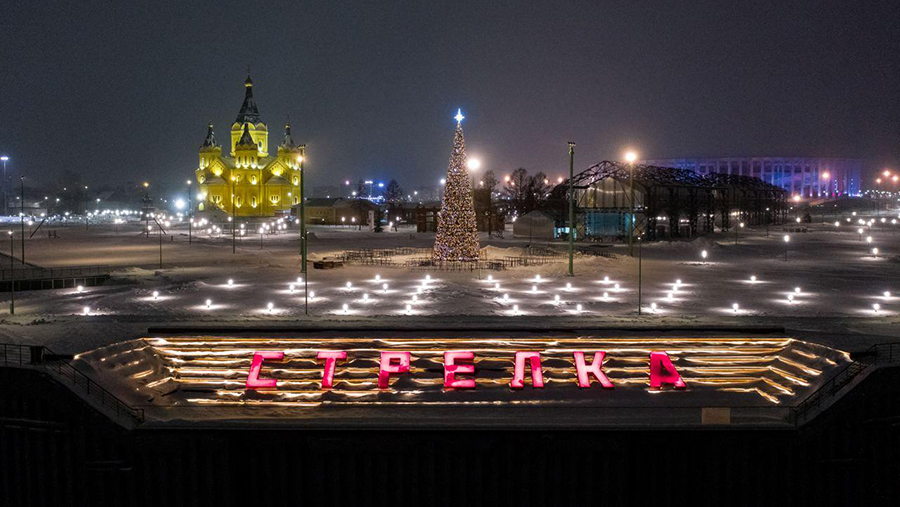 The high assessment of the head of the region is confirmed by others. Forbes magazine included Nizhny in the list of 10 new tourist centers in Russia, and the popular hotel booking site Tvil.ru placed the city on the fifth line of the federal rating of Christmas travel destinations.

At the end of 2021, the Nizhny Novgorod Region also entered the top 10 of the National Tourist Rating, which is published annually by the Rest in Russia magazine. Since 2020, the region has moved up two positions. Even the pandemic failed to stop the flow of tourists – throughout 2021, the hotels in Nizhny were densely filled, and on the May holidays and at the height of the 800th anniversary in August, there were almost no empty rooms left in the hotels.

According to Tele2, the New Year in the city was celebrated not only by residents of neighboring Chuvashia, Mordovia and the Vladimir region. Many tourists came from Moscow, St. Petersburg and the Krasnodar Territory.

According to preliminary estimates by regional authorities, about 2.3 million people visited the city last year, of which about 350,000 arrived in August to celebrate the city’s 800th anniversary. This is comparable, for example, with neighboring Kazan, which attracted 2.4 million tourists over the past year. In addition, Nizhny is ahead of such popular destinations as the Kaliningrad Region and the Stavropol Territory. At the end of the year, their tourist flow amounted to 1.9 million and 1.3 million people, respectively.

— This year, Nizhny Novgorod celebrated 2022 as the New Year’s capital of Russia, attracting the most modern formats: spectacular ice shows, light and audiovisual installations, various interactive and digital modules. The best assessment for the festival was the impressions and positive feedback from hundreds of thousands of tourists who spent these New Year holidays in the capital of the Volga region. Recently, Nizhny Novgorod has become one of the most popular tourist destinations for travel all year round, including another bright point of attraction for short trips for residents of the Volga Federal District, Moscow and St. Petersburg. As you know, the next stage of our tourist cashback program is starting, and I am pleased to invite everyone who has not yet been to Nizhny Novgorod to take advantage of the program and plan such a trip for a vacation or a weekend,” said Zarina Doguzova, head of Rostourism.

According to preliminary estimates of experts, tourists brought the region 14 billion rubles. This is about 1.5 times more than in 2020. Nizhny Novgorod has set the bar high and retained its attractiveness for travelers after the large-scale celebration of the 800th anniversary.