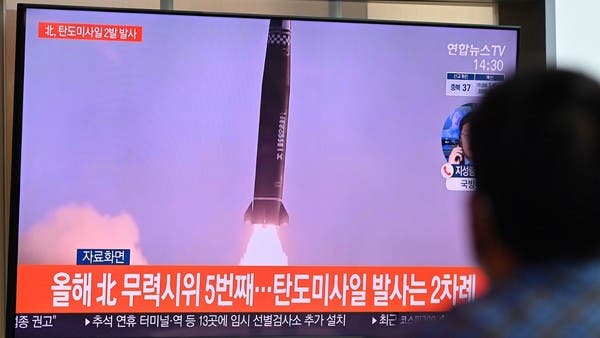 The South Korean military announced Tuesday morning that North Korea had launched an “unspecified projectile” into the sea, in the second missile test conducted by Pyongyang in the new year, after it launched less than a week ago what it said was a hypersonic missile.

The South Korean news agency “Yonhap” quoted the Joint Chiefs of Staff in Seoul as saying in a text message to reporters that the projectile was launched from the eastern coast of the peninsula towards the sea, without giving further details immediately.

In Tokyo, the Japanese Coast Guard announced that it had detected North Korea’s launch of a projectile “similar to a ballistic missile.”
This new missile test came hours after the United States, Britain, France, Japan, Ireland and Albania issued a joint statement calling on North Korea to “refrain from any new destabilizing activities.”

“We call on North Korea to refrain from any new destabilizing actions, to abandon its prohibited weapons of mass destruction and ballistic missile programs and to engage in a constructive dialogue around our common goal of complete denuclearization,” US Ambassador to the United Nations Linda Thomas Greenfield said, reading the joint statement. The Korean Peninsula.

“These activities increase the risks of error and escalation and pose a major threat to regional stability,” she added, stressing that “North Korea should now turn to dialogue and peace rather than its program of illegal arms and threats.”

“Each missile launch serves not only to enhance North Korea’s capabilities, but also to expand the range of weapons available for export to its customers and illegal arms dealers around the world,” she warned.
And last week, Pyongyang announced that on January 5, it had launched a missile carrying a “hypersonic glide warhead” and “accurately hit a target at a distance of 700 km.”

It was the second test that North Korea says it has conducted with a missile fitted with a hypersonic glide warhead, a sophisticated weapon that represented the latest technological advance in the Stalinist regime’s arsenal.
Since Kim Jong-un came to power ten years ago, North Korea has rapidly developed its military technology. And hypersonic missiles are among the “highest priorities” in Pyongyang’s five-year plan, state media announced last year.