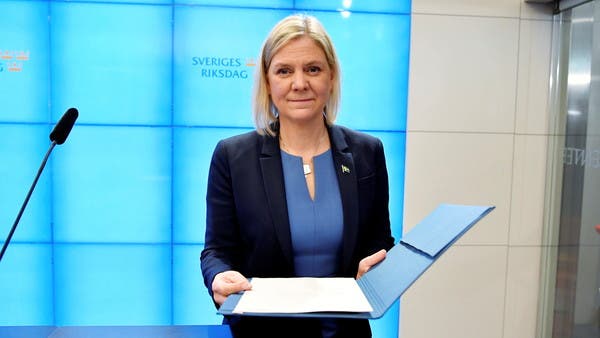 Sweden’s elected prime minister, Magdalena Andersson, submitted her resignation Wednesday, hours after she was appointed by parliament, following her failure to pass the budget bill and the withdrawal of the “Green Party” from the government coalition.

Congratulations to Magdalena Anderson on her appointment as Prime Minister today

“There is a constitutional custom that any coalition government should resign if a party withdraws from it,” Anderson, who belongs to the Social Democratic Party, told reporters. And she continued, “I do not want to head a government whose legitimacy is challenged.”

And Anderson expressed the hope that she would later be elected head of a minority government made up of the “Social Democratic Party” only.

Andersson today became the first woman elected to the post of prime minister in Sweden after reaching a last-minute deal with the Left Party to raise pensions in exchange for his support in a vote.

But the Center Party, which is considered relatively small, then withdrew its support for Anderson’s budget due to concessions to the left, leaving the budget with insufficient votes to pass in Parliament.

Instead, parliament adopted an alternative budget presented by the opposition “conservative moderates”, the “Christian Democrats”, the “Swedish Democrats” and the “ultra-right”.

The final blow came when the leader of the “Green Party” Per Boland declared that his party could not afford the “historic balancing of the opposition that was forged for the first time with the far right”, before he submitted his resignation from the government.