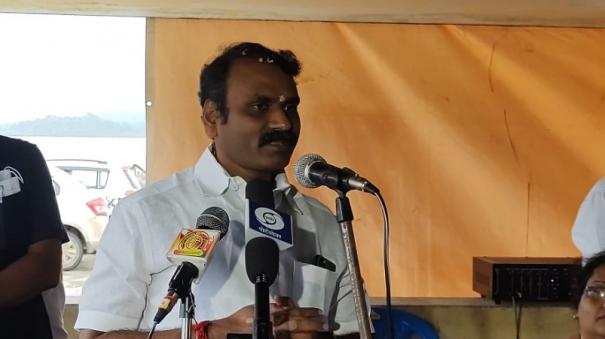 Union Minister L. Murugan has gone on a two-day tour to the Andaman Islands. He will participate in various programs there and on Thursday (July 14), the first day of the trip, he discussed with the fishermen in Rangat Bay area. At that time, the fishermen there mentioned that they had benefited from the various welfare schemes implemented by the central government and also made various demands.

The fishermen continued to speak and said that currently they are only fishing up to 5 nautical miles in fiber boats and they need a net and a sophisticated boat called a traveler for deep sea fishing. They insisted that the central government should provide those facilities.

Some of the fishermen have complained that they want a safe permanent residence and despite the fact that the government has already allotted Rs.1.75 lakh for building such residences under the “Modern Fishermen Village” project and has also selected the land for it, the project has been shelved for more than 6 years.

Minister L. Murugan heard the opinions of the fishermen and told them: “All these demands of yours will be brought to the notice of Prime Minister Modi and the concerned ministers and immediate action will be taken.”

Steps will be taken to provide facilities such as safe housing and traveler boat for deep sea fishing under the Modern Fishermen Village Scheme. Fishing only short distances with a fiber boat will not bring you much economic benefit. Longer distances lead to more and rarer fish. But fishermen from other countries nearby catch all these fish. I know how much economic loss this will cause us.

So, all these demands will surely be fulfilled. It was during Prime Minister Narendra Modi’s regime that a separate Ministry for Fisheries was created. This government will definitely protect your welfare,” Minister Murugan said.

Proceeding to Katamtala, the Minister then visited the Azad Hind Bridge connecting Katamtala and Paradong Island.