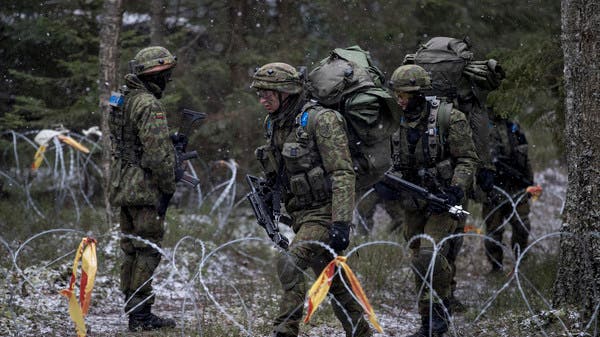 A statement published by the North Atlantic Treaty Organization (NATO) said that the alliance’s fighters stationed in the Baltic and Black Sea regions scrambled “several times over the past four days” to track and intercept Russian aircraft near NATO airspace, amid fears of a confrontation developing.

This comes as forces from the North Atlantic Treaty Organization (NATO) and other North Atlantic countries have begun a series of military exercises along its eastern flank throughout Europe.

On Sunday, the Polish armed forces announced the start of military exercises involving thousands of NATO soldiers.
The exercises are regular exercises aimed at improving security in the alliance’s eastern flank, but this year they come as Russia’s war on Ukraine erupts nearby.

Because of these circumstances, the Polish military appealed to the public on Sunday not to publish information or photos of columns of military vehicles expected to move across the country in the coming weeks.

He warned that “ill-considered activity” could harm the security of the coalition. “Let’s be aware of the risks!” he said in a statement.

The Polish military said in the statement that 18,000 soldiers from more than 20 countries are participating in the “Defender Europe 2022” and “Rapid Response 2022” exercises taking place in Poland and eight other countries.

The exercises are scheduled to take place from 1 to 27 May.

Aircraft, tanks, artillery and armored attack vehicles are participating in the exercises, which are scheduled to take place in Finland, Poland, North Macedonia and along the Estonian border with Latvia.

The exercises include forces from NATO and the Joint Expeditionary Force, which includes members from outside NATO, such as Finland and Sweden.

“The scale of deployment, combined with the professionalism, training and agility of the British Army, will deter aggression on a scale not seen in Europe this century,” Lieutenant-General Ralph Woods, commander of the British Field Army, said in a statement.

Deployments will begin this week in Finland, where forces from the United States, Britain, Estonia and Latvia are participating in training “Aru” to improve its ability to work alongside Finnish forces.

Meanwhile, the Ministry of Defense of Belarus said, on Saturday, that the North Atlantic Treaty Organization (NATO) plans to turn eastern European countries into a theater for possible military operations.

She said that NATO plans to launch “Defender of Europe” exercises in the Baltic and North Seas, noting that the main exercises will take place in Lithuania, Latvia and Poland.

Also this week, about 4,500 soldiers are taking part in the “Express Swift Response” exercise, which will include parachute drops and helicopter attacks in North Macedonia.

In turn, British Defense Secretary Ben Wallace said: “Europe’s security has never been more important… These exercises will see our forces join allies, partners across NATO, and the Joint Expeditionary Force in demonstrating solidarity and strength in one of the largest joint deployments since the Cold War. “.