I dedicate my final years to medical service: Ratan Tata 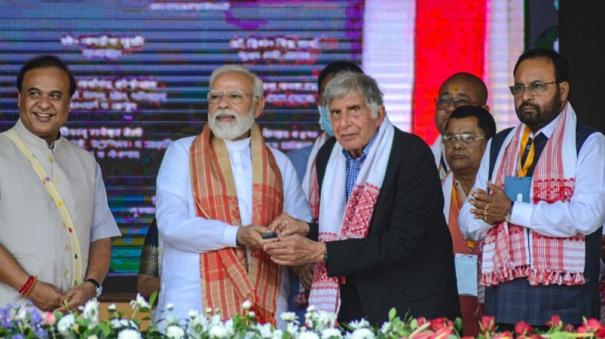 New Delhi: Businessman Ratan Tata accompanied Prime Minister Modi on the occasion of the inauguration of the cancer hospitals built on behalf of the Assam State Government and the Tata Foundation.

In Assam, 17 cancer hospitals are being built on behalf of the state government – Ratan Tata Charities. Prime Minister Narendra Modi on Thursday inaugurated seven state-of-the-art cancer hospitals built in them. The Prime Minister was accompanied by businessman Ratan Tata at the event. He said, “I dedicate my last years to medical service. The government of Assam must make Assam a state that everyone respects.”

Speaking at the inaugural function, Prime Minister Modi said: “7 new cancer hospitals have been opened in Assam. Once upon a time, it was a matter of celebration to open a hospital in 7 years. Times have changed. I was told that three more cancer hospitals will be ready for your service in a few months. Hospitals are at your service. But I would be happy if these new hospitals were vacant; I pray for your health. “