I used gold foil.. the painting “Great Saudi Arabia” changes the life of a plastic artist 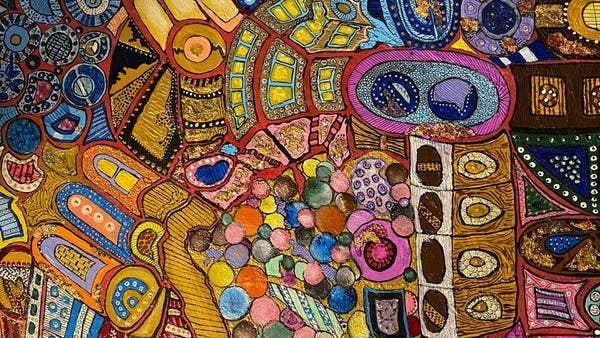 The Saudi artist, Fawzia Al-Maliki, did not know that the “Great Saudi Arabia” painting would change the course of her artistic life, and that it would reach the audience quickly, despite having painted it for more than 30 years previously, but she could not convey her message except through this painting in which she put the summary of her thoughts. And her feelings and feelings, and in her speech to “Al Arabiya.net”, Al-Maliki recounted her feelings towards this painting.

And she continued that she drew a part of it, then the Corona crisis came for two years and her brother died during this period, due to the heart and lungs stopping, so she left working on the painting for a period of time, and during the period of her grief for her brother, she entertained herself and took out the painting, and she returned to entertaining herself by drawing and she was drawing it while reviewing its memorization For the foregoing of the Holy Qur’an for being sealed in full.

Indicating that she was feeling harmony, as if she was doing textile work and found pleasure and happiness in completing the painting that saved her from her pain and sorrows, and that she tried to reflect positive feelings to console her Quranic verses, which were reflected in the colors of the painting.

She added that after the death of her brother, she lost hope of delivering it to the royal court, so after the end of the painting, she entered the membership of the Saudi Art Society and displayed it on the founding day. Followers of the arts, who unanimously agreed on the excellence and beauty of the painting.

She displayed it on foreign websites and found a high value, but she did not want the painting to leave the Kingdom because it represented the homeland and because it wanted to remain in the Kingdom.

She added that she entered to participate in one of the spaces on the Twitter application, a space that supports business, and there were businessmen supporting small projects, and Dr. Al-Jawhara Al-Majali was among the attendees, and she thanked her for her cooperation and effort in delivering this painting.

She said that she spent about ten months with her, because she needed a great brainstorm, due to the importance of distribution, color composition and the foundation of raw materials because of the touches of folklore, in addition to the important details of this painting.

She explained her feelings towards the painting and her dream of fulfilling her brother’s wish to deliver the painting to the royal court or the Crown Prince’s office.
Among the attendees, Sheikh Saeed bin Zagr offered to buy it, and said that he was from an artistic family and liked the painting, introducing his aunt, the artist Safiya bin Zagr, and told her that you have the option to place it in the national authority that you want, so the choice fell on the Riyadh Chamber, and the acquisition was made for 250 thousand Saudi riyals. Emphasizing that the moral value of the painting is worth a lot to her, that this painting is the most famous of her paintings at all, and it is considered in her view to be a painting with ten paintings, because each corner of it represents a single painting.

She indicated that she was interested in establishing the painting, and then frames, terrain and features, indicating that the background of the painting is sawdust, gold leaf and the materials that formed the painting using gold foil, stressing that it is preparing to present new paintings with distinctive materials.

She indicated that she dreams of universality, and that she will seek to present her artworks to the world, indicating that the arts in the Kingdom are witnessing a qualitative leap in the arts and the enthusiasm of artists and artists is a source of pride. And who launched his works with drawn plans and steady steps, in order to advance the artists, collect their words and make distinctive artistic plans that would lead them to the world. Al-Maliki did not forget to extend her thanks to the Saudi Society for Plastic Arts (GSFT) for their cooperation.