I will ensure that no mother is harmed by compulsory adoption: Kerala woman Anupama plans to rescue child through legal battle 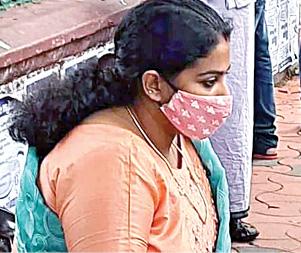 Anupama, a woman from Kerala who rescued her child after a major legal battle, said, “I will ensure that no mother is subjected to forced adoption anymore.”

Anupama is from Thiruvananthapuram. She fell in love with Ajit Kumar, a former executive of the Students Federation of India (SFI). Their baby boy was born in October last year. Anupama’s parents, who have strongly opposed their marriage, have handed over the child to the State Child Welfare Council for adoption.

Following this, Anupama lodged a complaint at the police station against the parents for abducting her child. Meanwhile, the State Child Welfare Council has legally handed over Anupama’s child to a couple from Andhra Pradesh.

Following this, Anupama was involved in a series of struggles before the Children’s Welfare Council to demand that her child be handed over to her. Following the media reports, the Trivandrum Family Land Court intervened in the matter. It also ordered the suspension of Anupama’s child adoption and directed the police to file a detailed report in this regard.

Accordingly, the child belonging to the Andhra couple was brought back to Kerala by the State Child Welfare Council last Sunday. Later, DNA tests were done on the child and it was confirmed that Anupama-Ajithkumar was the parent. The baby was handed over to them yesterday.

Anupama, who gave birth to her child after a long legal battle, told reporters there:

I never even thought my son would be available to me so soon. Because, many said that the child could not be regained after being legally adopted. When I visited the Kerala Child Welfare Council recently, they said the same thing.

Knowing I was looking for my baby, the State Child Welfare Council adopted him to another couple. I will continue to fight against the wrong officials in that council. I will make sure that no other mother is subjected to such forced adoption anymore. Thus said Anupama.