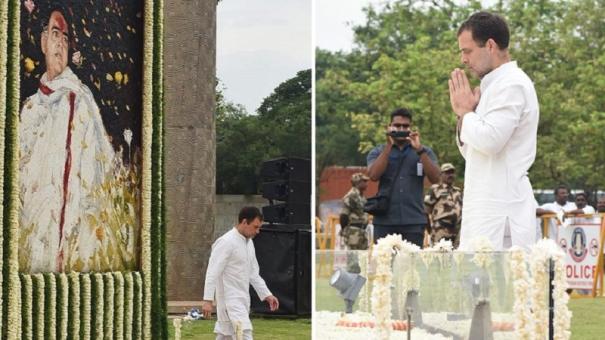 Sriperumbudur: “I will not lose my nation like I lost my father to propaganda,” Rahul Gandhi said.

Former Congress president Rahul Gandhi, who is going to start the Indian unity walk called ‘Bharat Jodo Yatra’ today to strengthen the party and motivate the volunteers, has said through Twitter that he will not lose this nation like he lost his father to the politics of hatred.

In this regard, he posted on his Twitter page, “I lost my father to the politics of hate and separatism. But I will not lose my nation to the same forces. Love will definitely conquer hate. Hope will conquer fear. Together we will overcome this.”

I lost my father to the politics of hate and division. I will not lose my beloved country to it too.

Love will conquer hate. Hope will defeat fear. Together, we will overcome. pic.twitter.com/ODTmwirBHR

Earlier this morning, Rahul Gandhi paid tributes at his father Rajiv Gandhi’s memorial in Sriperumbudur. Later he sat in front of his father’s photo there and attended a musical tribute to Veena Gayatri. He planted mango saplings there and hoisted the Congress party flag. Then he left from there. He travels from Chennai to Thiruvananthapuram by air and from there travels to Kanyakumari by car.

Rahul Gandhi’s Solidarity Walk from Kumari to Kashmir will be inaugurated by Chief Minister M. K. Stalin in Kanyakumari. 3,500 km across 12 states in a total of 150 days. This trek is done for distance.