If Congress comes to power in Karnataka, heads of households will be given Rs 2,000 per month: Priyanka Gandhi announced 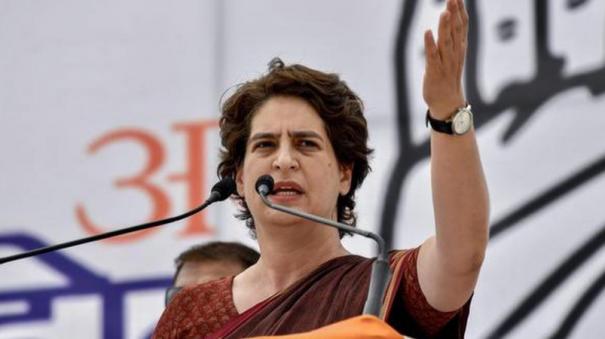 Bengaluru: The party’s general secretary Priyanka Gandhi has announced that if the Congress comes to power in Karnataka, the heads of families will be given Rs 2,000 per month.

Assembly elections will be held in Karnataka state in April or May. The ruling BJP, opposition parties such as Congress and Majadat are working on different strategies to capture the power. It has already been announced that if the Congress wins this election, up to 200 units of free electricity per month will be provided to the poor and middle class.

Corruption is rampant in all sectors under BJP rule in Karnataka. Contractors say that ministers get 40 percent commission to execute government projects. They take bribes up to Rs.30 lakhs to get government jobs. In the last 3 years, BJP has looted to the tune of Rs.1.5 lakh crore. It is said that they have received Rs.3,200 crore as commission for the Rs.8,000 crore development work in Bengaluru.

Because of this, people are angry with the BJP government. Congress will win big in the upcoming elections. If Congress comes to power, all heads of families will get Rs. 2 thousand will be given. This amount of Griha Lakshmi Scheme will be paid directly into the bank account of the head of the family. This money will be a relief to the heads of families who are affected by price hike and gas cylinder price hike. 1.5 crore women will benefit from this scheme.

Being a head of the family I am well aware of the problem of women. Congress wants women to become economically independent. A special election manifesto focusing on women will be published by the Congress party in the upcoming elections. Congress will support women to come to power and stand on their own feet.