If the Zambian was a referee, the “tenth” would have been absent, and Egypt would be tied with Saudi Arabia 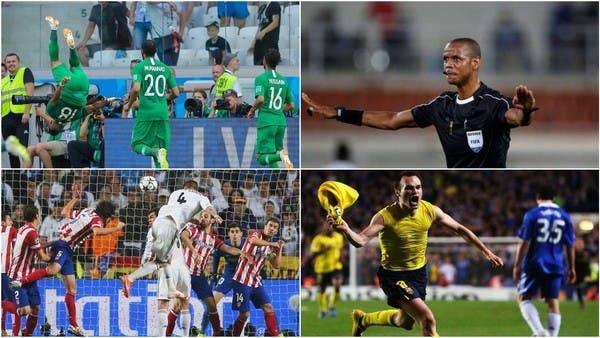 The whistle of the Zambian referee, Gani Sikazwe, sparked a great controversy because of her ending the match between Tunisia and Mali during the African Nations Cup in the 89th minute and before the time set for it, and it would have changed the rudder of many matches and international and Arab championships, and perhaps many heroes differed if the Zambian was a referee for those matches.

When the 89th minute came at Barcelona Stadium during the famous final between Bayern Munich and Manchester United, the latter was late with a clean goal scored by Mario Basler in the sixth minute, and if the Italian referee Collina ended the match then we would not have seen a historic return to the Sir Alex Ferguson team led by Teddy Sheringham and Solshire.

Bayern Munich would be equal with AC Milan in the number of titles with seven championships, while Manchester United would have only two trophies.

The end of the match between Manchester City and Quones Park Rangers in the 89th minute would have given the league title this year to the neighbor Manchester United, and the match of the other city pole would have ended with the visitors winning two goals to one, without Dzeko equalizing for Manchester City, and Sergio Aguero scored the historic winning goal for the “Citizens”. The third league title in their treasuries, and the first with the modern name.

Chelsea to the 2009 Champions League Final

Barcelona’s famous hexagonal in the 2008-2009 season would not have been achieved if their match against Chelsea in the 2009 Champions League semi-final ended without calculating the lost time, as the result that indicated the progress of the “Blues” with Essien’s goal sent Chelsea to the final against Manchester United for the second year in a row.

Without Iniesta’s killer goal in the 93rd minute, Barcelona would have been satisfied with only the domestic treble without winning the Champions League, the European Super, and the Club World Cup.

There is no “tenth”!

When the hour of the Stadium of Light in Lisbon referred to the 93rd minute during the 2014 Champions League final between the two poles of the capital Madrid, Real Madrid player Sergio Ramos rose high and headed the ball into the net of Atletico Madrid goalkeeper Thibaut Courtois, to add another 30 minutes to the final and his teammates were able to score 3 goals Others donated the “tenth” to the “Merengue”.

Had it not been for the lost time, Godin would have given Atletico Madrid the first Champions League title in the team’s coffers, nicknamed the “Red Indians” after his goal in the 36th minute.

If the referee, Felix Brych, blew before the end of normal time in the “Johan Cruyff Arena”, the stronghold of Ajax during the semi-finals of the 2019 Champions League, the Dutch team would have reached the Champions League final for the first time in 23 years, when they lost to Juventus in 1996.

Overtime gave hope to Tottenham, and Lucas Moura completed his hat-trick in the 96th minute to fly Pochettino’s battalion to the Wanda Metropolitano stadium in the Spanish capital, Madrid, to meet Liverpool in the continental final.

Al-Ahly fans of Egypt can not forget the second leg of the 2006 African Champions League final, when Jasaria Abu Trika gave them the title in the 92nd minute at the expense of Sfaxien, after the first leg ended in a 1-1 draw between the two teams.

And the weddings would have turned from Cairo to Sfax if the match ended without his extra time, to raise Abdel Karim El Nafti and his colleagues the title of the first African Champions League in the history of Sfaxien.

With the final whistle sounding at the 89th minute in the Volgograd Arena, which hosted the meeting of Egypt and Saudi Arabia during the third round of the World Cup Russia 2018, the two teams would have shared the points of the match after Mohamed Salah advanced with a goal in the 22nd minute for the Egyptians, and Salman Al-Faraj tied for Al-Akhdar in stoppage time in the first half.

Salem Al-Dosari grabbed the three points for the Saudi team, with the goal of snatching Al-Hadary’s net in the 95th minute, and leaving the Egyptian team without points after the end of the group stage of the World Cup.