If yes, Kabul: Putin called on the United States to rebuild Afghanistan 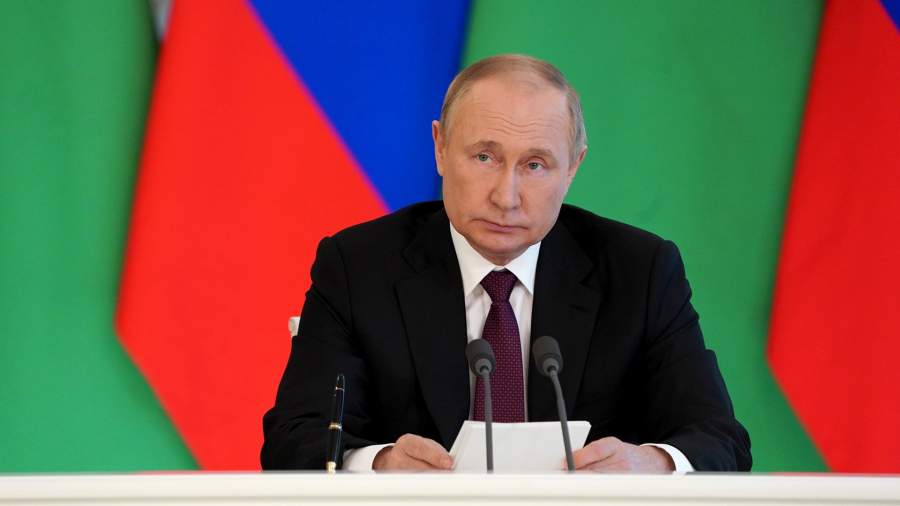 The United States and its allies must assume the main responsibility for the reconstruction of Afghanistan. Vladimir Putin stated this following a meeting with President of Turkmenistan Serdar Berdimuhamedov., who arrived in Moscow for the first time after his election as head of state. It was the topic of normalizing the situation in Afghanistan that turned out to be one of the main ones at the Russian-Turkmenistan talks, as a result of which a declaration was signed on deepening the strategic partnership between the two countries.

For Serdar Berdimuhamedov, who succeeded his father, Gurbanguly, as president this year, the trip to Russia was the first official foreign visit.. Although it is worth noting that even before visiting Moscow, the newly elected leader of one of the most closed countries in the world (the country maintains a visa-free regime with only a few states, and it is, in fact, impossible to get to Turkmenistan as a tourist after the start of the COVID pandemic in the world) visited Saudi Arabia to perform the rite of Umra Hajj (small pilgrimage). However, for a politician from a country with a predominantly Muslim population, this was still a ritual action dictated by following the canons of faith, Elena Panina, director of the RUSSTRAT Institute, reminded Izvestia.

Vladimir Putin received a high-ranking guest in the Green Living Room of the Grand Kremlin Palace, the interior of which perfectly fit the national flag of Turkmenistan. Thus, a politician from a country where the color green is extremely popular (this applies not only to state symbols, but also, for example, school uniforms for girls or even notebooks and pens of members of the Turkmen delegation), most likely, felt himself as comfortable as possible during the negotiations .

— We are very pleased that you are making your first state foreign visit to our country.. This once again emphasizes the special nature of our relations,” Vladimir Putin said at the beginning of the open part of the meeting.

According to him, together with the previous leader of Turkmenistan, Gurbanguly Berdimuhamedov, whom he called a “good and kind friend,” he managed to advance the interaction between the two countries to a strategic level. Serdar Berdimuhamedov also praised bilateral relationswhich did not begin to be limited to a brief introductory speech.

In addition to recalling 288 international documents signed between Moscow and Ashgabat, the Turkmen president, for example, mentioned the successful holding of the first Dialogue of Women in Central Asia and the Russian Federation, held in May. The fact that Serdar Berdimuhamedov touched on the women’s agenda was a little unexpected. Indeed, after the recent elections, Turkmenistan attracts the attention of the world media, primarily due to the restrictions on the rights of the fair sex.

At the moment, women in the Central Asian republic are forbidden to increase eyelashes, tattoo eyebrows, inject Botox and dye their hair. Moreover, now they can not even be placed on the front seat of the car. Against this background, Serdar Berdimuhamedov is regularly criticized by human rights organizations, including the International Planned Parenthood Federation, who claim that such initiatives come directly from the first person.

However, for the citizens of Turkmenistan themselves, such restrictions, which often operate behind the scenes in the country (that is, they are not enshrined in any state documents or orders), have long become a familiar part of life. Even during the reign of Gurbanguly Berdimuhamedov, who wrote dozens of books and regularly demonstrated his musical abilities to the general public, local residents, for example, were allowed to buy only white cars.

After bilateral negotiations, Vladimir Putin and Serdar Berdimuhamedov went to the press. At the same time, before summing up the results of the meeting the head of the Russian Federation presented his colleague with the Order of Friendship for the development of close relations with Russia. This, by the way, provoked a storm of applause among the members of the Turkmen delegation, who carefully outlined every word of Serdar Berdimuhamedov in those same green notebooks using pens of the same color.

Issues of humanitarian cooperation took an important place in the talks between the two leaders. Vladimir Putin recalled that in January alone, the Russian Federation supplied 800,000 doses of the Sputnik Light vaccine to Turkmenistan. Of these, 300 thousand were donated. It is noteworthy that, based on the official statements of the authorities, Turkmenistan, in fact, bypassed the coronavirus. Turkmen authorities claim that no cases of COVID-19 have been reported in the country. Perhaps for this reason, the members of the Turkmen delegation did not put on masks during the summing up of the results of the negotiations at a time when all Russian journalists were sitting in personal protective equipment.

Meanwhile, Vladimir Putin also supported Serdar Berdimuhamedov’s idea to create a joint Russian-Turkmenistan university. The presidents also exchanged views on international issues. Including the situation in Afghanistan. The tense situation in this country, where power again passed to the Taliban (the movement is under UN sanctions for terrorist activities) a little less than a year ago, is perceived by the Central Asian states due to geographical factors as the main security problem.

“When exchanging views on the situation in Afghanistan, both sides noted the importance of ensuring stability and security in this country, solving acute socio-economic problems, neutralizing threats emanating from Afghan territory, first of all, of course, this is connected with terrorism,” Vladimir Putin said. .

The Russian Federation is also ready to continue joint work with Turkmenistan and other partners, including through the Moscow format of consultations (this includes Russia, India, Iran, the USA, China, Pakistan and the five Central Asian republics) on the post-conflict reconstruction of Afghanistan. However Moscow is convinced that the main obligations for the reconstruction of the country, primarily financial ones, should be assumed by the United States and its allies. According to Vladimir Putin, it was their 20-year presence that brought Afghanistan to a critical point..

As for the economic agenda, Vladimir Putin recalled that Russia is one of the main partners of Turkmenistan. Last year, bilateral trade totaled $865 million.

Foreign economic relations of Turkmenistan with other states are mainly related to the oil and gas sectorProfessor of the Department of World Economy and International Economic Relations of the State University of Management Yevgeny Smirnov noted in an interview with Izvestia. Russia and Turkmenistan had a long history of cooperation in this area, however, in recent years, Ashgabat has strengthened its focus, primarily on China, the expert added. In 2009, a gas pipeline was even launched between the two countries.

– China has become the only buyer of Turkmen gas, and Turkmenistan has become dependent on this country for credit. Under these conditions, the Russian company Gazprom returned to Turkmenistan, resuming gas imports from this state. This import, in particular, can be used to fill the Turkish Stream gas pipeline, but more importantly, the resumption of cooperation in the gas sector can become a powerful factor in strengthening Russia’s geopolitical position in the region, Yevgeny Smirnov summed up.

In addition to Gazprom, Lukoil is interested in cooperation with Turkmenistan. He is negotiating terms of participation as an operator of the Dostluk oil and gas condensate field development project in the Caspian Sea, Vladimir Putin noted. Besides, Tatneft successfully operates in Turkmenistan, engaged in the repair and maintenance of oil wells, he added. The negotiations also touched upon the further development of industrial cooperation. Several successful projects have already been implemented in this direction. In particular, Transmashholding manufactured two diesel locomotives for the Railways of Turkmenistan, and in March a contract was signed for another five such machinessaid the Russian president.

In Moscow, the presidents signed several bilateral documents, including a declaration on deepening the strategic partnership between Russia and Turkmenistan. It fixes the priorities of joint work in the political, trade and investment, cultural and humanitarian fields, as well as in the field of security, including biological and information.

According to Elena Panina, Turkmenistan occupies a special place in the system of regional relations. Currently it is the only state in the post-Soviet space that is not part of any military-political unions. Thus, interaction with Russia is carried out on the basis of exclusively bilateral agreements.the expert emphasized.

Nevertheless, due to the noticeable complication of the situation in the region, in particular in the Afghan direction, Ashgabat is ready to raise relations with Moscow to a new level already in the military sphere, the expert summed up in an interview with Izvestia.

By the way, Serdar Berdimuhamedov is confident that the last visit confirmed the strength of the strategic partnership between the two countries. He also invited Vladimir Putin to pay an official visit to Turkmenistan at any time convenient for him.