‘If you send Rs 1 on that day, only 15 paise belongs to the people’ – Modi who mocked the Congress in Germany 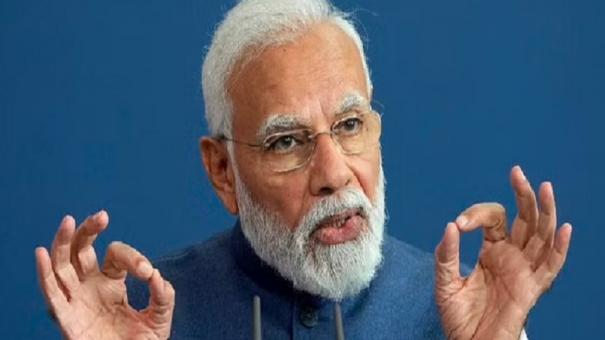 “On that day, a Congress prime minister said that sending Rs 1 from Delhi would cost the people just 15 paise. We need not worry like him. We have the technology,” said Prime Minister Narendra Modi.

In the current 2022, Prime Minister Modi will be making his first foreign trip to European countries. For this, he flew from Delhi to Germany on Sunday.

Following his trip to Germany, he will also travel to Denmark and France. Prime Minister Modi, who is visiting 3 countries, is participating in 25 events, including meetings and discussions with the leaders of those countries. He is also scheduled to hold discussions with 50 international industry leaders. He is also scheduled to meet expatriate Indians.

In this context, Prime Minister Modi addressed a gathering of Indians living in Germany yesterday.

He said, “On that day, a Congress Prime Minister had said that sending Rs. 1 from Delhi would cost the people just 15 paise. We need not worry like him. We have so far added Rs 22 lakh crore directly to the user’s bank account, which is also a victory for democracy. We do not care about a secure future for the new India. New India is bold and innovative. There are many unicorn companies. Even though they were one nation before, there was not a single constitution in force. They have not been able to create one for 70 years. .