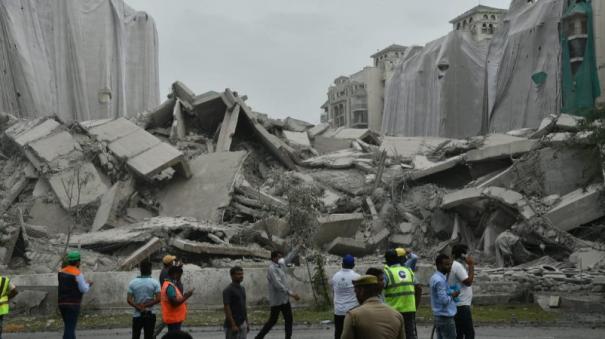 Noida is located in Gautama Buddha district of Uttar Pradesh. This area located near Delhi is developing rapidly. 2 apartment complexes Apex (32 floors) and Seyen (29 floors) were built under the Emerald Court project in Noida’s ATS village. Of these there were 857 houses. 600 houses have been booked in this. These two residences were called twin tower buildings.

3,700 kg of explosives: Edbis of India and Jet Demolition of South Africa have been entrusted with the task of demolishing the building. Over the past few months, experts from both companies have studied the buildings and decided to demolish them using waterfall implosion technology.

10,000 holes were drilled in two flats and 3,700 kg of explosives were filled. 18 crore was spent on explosives alone. Around 1.5 km around the twin tower building. About 7,000 people who lived within the distance were evacuated. The volunteers caught 35 stray dogs roaming around in the areas and took them to safe places.

IIT Chennai Experts: Over 3,000 vehicles parked in the Emerald Court residential area were shifted. 5 ambulances and a team of doctors were kept ready. 6 hospitals were kept ready. More than 15 air purifiers were installed to control the air pollution caused by the demolition of the building. Soldiers from the National Disaster Response Force were also deployed at the spot to deal with the emergency situation.

10 experts from IIT Chennai were called to the spot to study the vibrations caused by the collapse of the building.

Traffic on Greater Noida Express Road, Noida was halted. Power supply was completely stopped. Model exercises were conducted on the actions to be taken in case of any mishap during the demolition of the building.

Under the leadership of the Tamil Nadu official.. – The task of guarding the demolition of the twin towers was entrusted to Rajesh, Deputy Commissioner of Noida Metropolitan Police Department, headed by this Tamil IPS officer from Koilpatti, 550 policemen were on duty. It was confirmed at 7am yesterday that no one was in the area. After this the demolition work started on the order of officer Rajesh. A special committee of seven members was appointed in this team. Officer Rajesh and 6 others were bomb experts. Two of these experts are Indian and 4 are from Africa.

Sale of ruins for Rs.15 crore: Yesterday at 2.30 pm the button was pressed to detonate the explosives as planned. In the next 9 seconds, both buildings collapsed like decks of cards.

There was little damage to nearby buildings. The building debris is piled up to 4 stories high. Its weight is calculated to be 80,000 tons. Construction waste has been sold for Rs.15 crore. Over the next few days, the construction waste will be trucked away.

The entire area was covered in smoke when the building collapsed. Water was sprinkled by 100 water trucks to control air pollution. Hundreds of sanitation workers have been deployed to clear the scene. Environmental experts have said that it may take a few days for the air pollution around Noida to come down.

The construction company bore the entire cost of demolishing the building as per Supreme Court orders. And Supertech returned the money paid for these houses.

We have refunded the money to those who booked in the demolished buildings as per the Supreme Court order. So far we have built and handed over 70,000 houses to the owners in Noida area. Our other construction projects will not be affected. It says so.