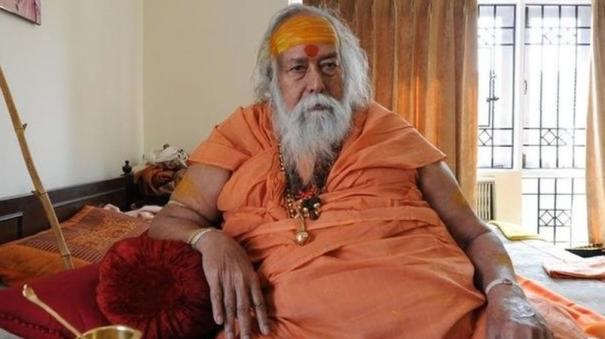 New Delhi: Jagadguru Swaroopananda Saraswati was the head of the Dwarka Peetha founded by Advaita Acharya Adi Sankara. He was staying at Jyotheeswar Ashram in Narsinghpur, Madhya Pradesh and fell ill the day before yesterday. In this case, his life was lost at 3.30 pm.

Born in Digori village of Seoni district in Madhya Pradesh in 1924, he was a disciple of Brahmananda Saraswati who was Shankaracharya of Jyotir Mutt in Badrinath.

Swami Swaroopananda Saraswati, who has been the head of two mutts, Dwaraka Peedam in Gujarat and Jyotir Mutt in Uttarakhand, has also been the president of the Akila Bharatiya Rama Rajya Parishad. In 1942, he went to jail for taking part in the Quit Khru movement. 9 months in Varanasi Jail and 3 months in M.P. He was also in prisons.

He received the title of Shankaracharya in 1981 and continued as Dean. Swami Swarupananda, who had been suffering from health problems for the past few years, was staying in Bengaluru and receiving treatment. He recently returned to Jyotheeswar Ashram and the day before yesterday he again fell ill and died.

In his condolence message, the Prime Minister said, “The death of Swami Swaroopananda Saraswati is deeply saddened. I offer my deepest condolences to his followers,” he said.