In 15 minutes.. Ittihad Jeddah rises up and turns the tables on the agreement 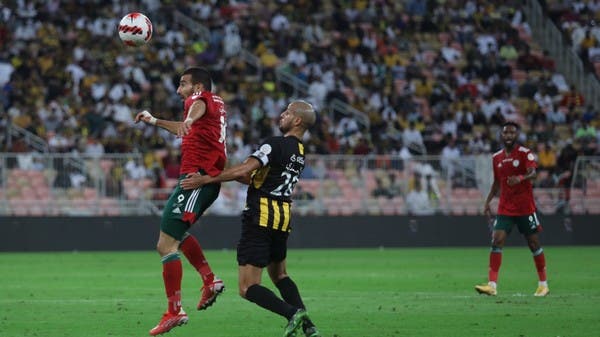 Ittihad Jeddah continued its strong performances after turning the table on its guest Al-Ettifaq, turning its two-goal delay into a three-goal victory to consolidate its lead, in the confrontation hosted by King Abdullah City Stadium, “The Radiant Jewel” on Sunday in the 14th stage of the Mohammed bin Salman Professional Cup League.

Al-Ittihad succeeded in overturning its two-goal deficit to win by three in the second match in a row, after its victory over Al-Fateh last Tuesday in the same way in the King’s Cup.

The match witnessed great excitement, as it was the offensive start of Al-Ittihad, which scored a goal after 18 minutes through its Egyptian defender Ahmed Hegazy, but the referee canceled it after returning to the video technology due to offside.

And in the 29th minute, Al-Ittihad defender Ziad Al-Sahafi made a big mistake when Al-Ettifaq awarded the first goal by mistake in the net of Brazilian goalkeeper Grohe.

Al-Ettifaq continued its attack, and its Swedish player, Robin Quasion, scored the second goal in the 41st minute, after turning his Moroccan colleague Walid Azzaro’s cross with his foot into the Al-Ittihad net.

In the second half, Al-Ittihad rose up and took control of the match, and striker Haroun Camara managed to score a goal to reduce the difference at the 71st minute, after he completed the cross of his colleague Fahd Al-Muwallad with his foot in the Al-Ettifaq net.

Al-Ittihad continued its attack, and its defender Ziad Al-Sahafi succeeded in making up for his mistake when he managed to score the equalizer in the 82nd minute after rising to the cross of his Brazilian teammate Bruno Henrique and heading the ball past Algerian goalkeeper Rais Mbolhi.

Al-Ittihad intensified its attack, and its striker, Harun Camara, scored the third goal in the 85th minute, after turning the cross of his Brazilian colleague Romarinho with his foot into the goal net.

With this result, Al-Ittihad’s balance rose to 29 points to consolidate its lead, 4 points ahead of its young runner-up, who will face Al-Taawoun on Monday at the end of the stage. Al-Ittihad remained on its previous score of 17 points, to remain in eighth place temporarily.