In a qualitative operation, the life of a young woman who was injured in a traffic accident was saved 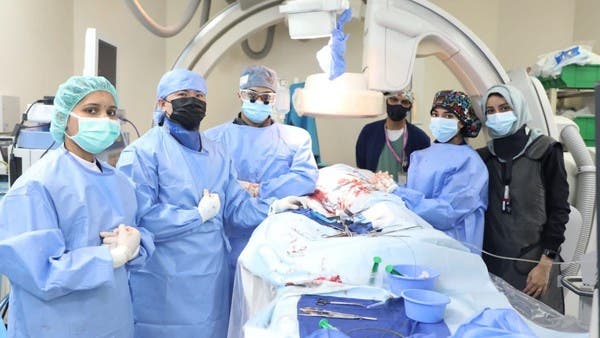 A medical team specialized in vascular surgery at King Abdullah Medical Complex in Jeddah, western Saudi Arabia, was able to save the life of a young woman in her thirties, after she suffered a traffic accident that caused her to suffer a chest hemorrhage, a rupture of the thoracic aorta, and rib fractures.

And Jeddah Health stated to Al Arabiya.net that the case was received after prior medical coordination from a general hospital in Jeddah.

She also added that the clinical examination and all the necessary medical examinations, including laboratory and radiological, were conducted upon her arrival.

Immediately, it was decided to perform angioplasty, vascular surgery, according to the plan.

In addition, the patient underwent a procedure to place a stent in the aorta to cover the injury site through an opening in the thigh, in which the stent was placed in a quick record time under successful interventional radiology, which lasted 90 minutes.

Photo before and after the operation

In turn, the head of the medical team treating the case, Dr. Bader Saeed Rajab, stated that the procedure in the operation is a modern medical leap, as the alternative to the procedure in force is to open the chest and surgically change the aorta, which is a high-risk operation for the patient compared to the process of placing a stent through a surgical catheter. .