In Friday prayers.. the return of the rows of worshipers separated in the Two Holy Mosques 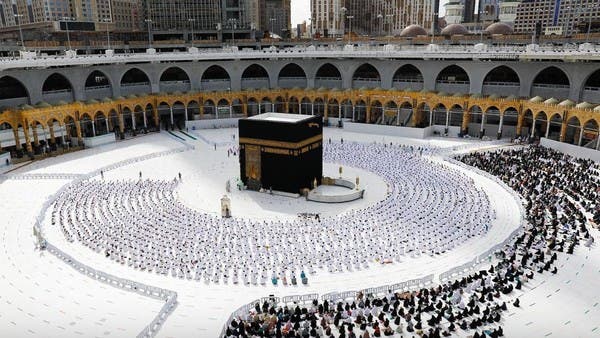 Amidst strict measures in the application of precautionary and preventive measures, the masses of worshipers in the Grand Mosque and the Prophet’s Mosque performed Friday prayers, and the General Presidency for the Two Holy Mosques applied strict precautionary measures among worshipers in the Prophet’s Mosque, as well as among worshipers and pilgrims who came to perform Friday prayers in Al-Masjid Al-Haram to prevent infection with the Corona virus, and the rows of worshipers returned farther around the Two Holy Mosques.

For his part, the official spokesman for the General Presidency for the Affairs of the Grand Mosque and the Prophet’s Mosque, Hani Haidar, explained that the presidency has completed the procedures for implementing physical distancing between worshipers and pilgrims in the entire Grand Mosque and its external yards.

And he indicated that the presidency has restored the posters of physical separation between the ranks of the worshipers and the paths of the pilgrims, as the procedure included the courtyard and the chapels inside the Great Mosque and its courtyards; In order to preserve the safety of pilgrims and worshipers and to prevent the Corona pandemic.

Distancing in the Prophet’s Mosque

The mechanism of circumambulation and the flow of movement

Haider stated that the presidency, in cooperation with the authorities working in the Grand Mosque, is supervising the mechanism of circumambulation and the flow of the movement of pilgrims, while ensuring the distance between them, and the continuation of work on the virtual paths in the courtyard and increasing the number of chapels dedicated to performing the year of circumambulation, enabling pilgrims to perform their rituals easily and with the achievement of precautionary measures. He pointed out that the non-pilgrim pilgrims have allotted the first floor to them, with it equipped with virtual paths, to ensure ease and flow of movement.

The spacing between the pilgrims

With regard to prayer in the Grand Mosque, Haider stated that the presidency had prepared the chapels of King Fahd’s expansion in all their roles, and the chapels of the third Saudi expansion at full capacity with its external yards and internal corridors, with indicative posters for physical distance between worshipers, and rearranging the ranks in application of precautionary measures, noting that the difference The field works around the clock to ensure complete readiness, and provides all services to worshipers to ensure that they can easily perform worship.

He stated that daily sterilization of the entire Grand Mosque and its facilities is carried out ten times, using approximately (34,000) liters of sterilizers to sterilize all surfaces, floors and carpets, in addition to using more than (500) automatic devices to sterilize hands with the sensor feature, and (20) Biocare devices, and (11) intelligent sterilization robots, (600) electronic and manual sterilization pumps, and (20) mist-spray sterilizers.

He stressed the need for pilgrims and worshipers to adhere to wearing a medical mask, sterilizing hands, adhering to the physical distance, and cooperating with workers in the Holy Mosque in Makkah who work for their comfort and safety.