In pictures, a bracelet was extracted from the intestines of a Saudi child in Jeddah 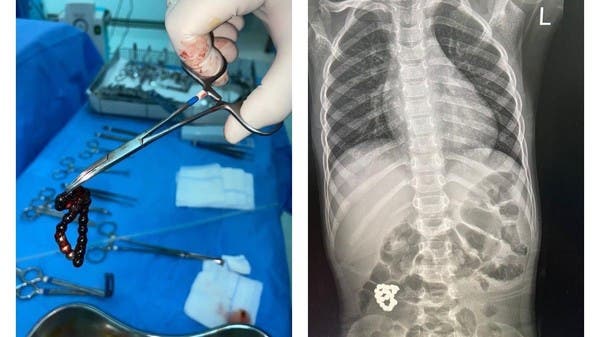 In a two-and-a-half hour operation, King Abdulaziz Hospital in Jeddah, western Saudi Arabia, succeeded in extracting a bracelet from the intestines of a child.

In an interview with Al Arabiya.net, Jeddah Health confirmed that a medical team at King Abdulaziz Hospital in Jeddah saved the life of a six-year-old child.

She also added, “The child came to the hospital emergency complaining of abdominal pain 4 days ago, and it increased with time, and after doing the necessary tests, the radiographs showed the presence of a foreign body in the intestine, and immediately the child was admitted to the operating room and the foreign body was extracted, pointing out that The intestinal wall was damaged, as the damaged parts were removed in a successful operation.”

She confirmed that the child is in a stable condition in the regular hypnosis department, and his condition is improving.