In pictures… a Cuban runner challenges the mountain… by running backwards 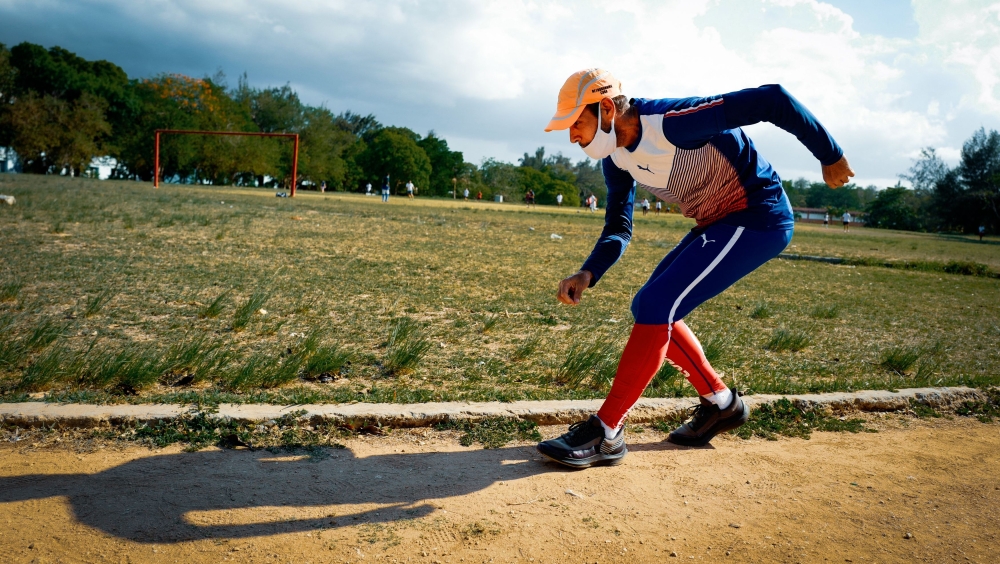 
Cuban Wilfredo Diaz discovered retro running 32 years ago in a Russian magazine, and is heading to Italy this week for a half-marathon…in the mountains. “I feel good, I have succeeded in activating the whole machine,” Diaz told AFP during a training session on a school field in West Havana, where several young men were playing soccer. “I will do everything in my power for Cuba,” he added.

Diaz will be the only one to dodge during the Dolomiti Extreme Trail half marathon in the Italian region of Forno di Zoldo on Sunday. But the 46-year-old said he was “better prepared” than ever.

The psychologist has previously won five medals at the world championships for this atypical sport, one gold (in the 4x400m relay), three silver and one bronze.
The World Championships in this sport was supposed to be held in July 2020 in Enfield, England, and is the eighth since the first edition in Switzerland in 2006, but it was canceled due to the pandemic. The tournament was postponed to this summer and is scheduled to take place at the end of July in France, but concerns remain about health conditions.
Wilfredo noted that Sunday’s Giro d’Italia is more difficult because its location will not be familiar for this type of running, as it is held in a mountainous area, and it is the first time the Cuban runner has run in a similar circumstance.

This prompted Poelfredo to conduct his training on sloped sites. A few days ago, he had a good time on a circuit in Cuba, running the distance in 2:18:53, which made him optimistic about Sunday’s race. On the communist island, whose residents constantly complain that reforms are slow, and even some of the backsliding, news that a Cuban is leading the way globally in the back-to-back race has prompted humorous comments on social networks. “Winning a gold medal is easy, it’s like child’s play,” one joked on Twitter. Another commented, “We’ve been training for decades, and when it comes to going back, nobody beats us, so the gold is guaranteed.”

“Great sport”
Wilfredo has so far participated in two world championships, the first in Essen (Germany) in 2016 and the second in Bologna (Italy) in 2018. During the Central American Championships in Santo Domingo (Dominican Republic) in 2019, he drew attention by winning five gold medals in competitions long distances.

But success in this unusual type of sport requires rigorous training. Wilfredo gets up every day at 4 a.m. and trains for about three hours, follows a strict diet, and uses weights as part of his training program. “Preparation is difficult,” the runner admitted. “Sometimes our capabilities are limited, and some things are missing, but I always find someone to help me,” he said, as Cuba, which is suffering from a deep economic crisis, imposes severe restrictions on travel and gatherings due to the Covid-19 pandemic.

As a child, Wilfredo tried scuba diving, but was not convinced. Then he turned to walking, until he signed an article in a Russian magazine that mentioned running backwards, a sport that was born more than a thousand years ago in China, but whose records did not begin to be set until 1896. It is unlikely for Wilfredo to return to Backwards, running backwards has “more than 200 beneficial effects” for health.

He noted that the sport “improves spatial orientation and peripheral vision” and “burns 50 percent more calories than front-running,” calling it “a great sport!”

Wilfredo loves the sport so much that he introduced it to Cuba, although at first some described him as “crazy”. In 2013, he organized a national championship in which 80 runners from eight provinces and four other countries participated. In 2018, about 200 runners took part in an international meet in Artemisa, near Havana.

A record number of victims of ticks was registered in Karelia

With 4 artistic forms .. a new character with the identity of the "Year of Arabic Calligraphy"